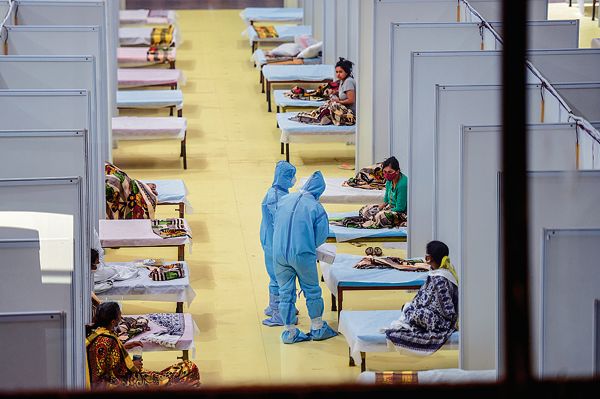 Health workers with patients at a Covid care centre in New Delhi. PTI

The Centre today augmented medical oxygen supplies to 12 high-demand states and UTs even as India’s Covid crisis worsened with daily cases nearing the grim 3-lakh milestone and an oxygen tanker leak leaving 24 patients dead at a hospital in Maharashtra’s Nashik.

Responding to oxygen supply alarms, the Centre increased quotas for 19 high-demand states and UTs—Punjab, Haryana, Himachal Pradesh, Delhi, Chandigarh, Maharashtra, Rajasthan, Karnataka, Madhya Pradesh, Kerala, J&K, Andhra Pradesh, Telangana, Uttar Pradesh, Tamil Nadu, Goa, Uttarakhand, Gujarat and Chhattisgarh. Union Health Secretary Rajesh Bhushan said 6,600 MT of the 7,500 MT daily production of oxygen was being supplied to states on demand. “Barring nine industries, oxygen supply has been ordered to be diverted for medical use. The order was further refined today and even the plants that don’t have a captive oxygen plant will no longer be in exempted category,” he said.

The government said during the last wave peak, about 3,500 MT requirement of oxygen had been noted.

Bhushan said 70 PSA (pressure swing absorption) plants would be operational by month-end while 33 were already functional. In all, 162 PSA plants have been sanctioned.

Asked how India couldn’t gauge the second wave threat, the Health Secretary said, “This is not the time to discuss why and how we missed the second wave. We have to focus all our energies on saving lives.”

Bhushan said expressions of interest (EOI) for importing 50,000 MT of oxygen had been received and were being evaluated.

Maharashtra Chief Minister Uddhav Thackeray has ordered a high-level probe to determine the cause of the mishap. Prime Minister Narendra Modi called the tragedy “heart-wrenching”. The families of the deceased looked crestfallen with some saying the doctors attributed the deaths to Covid and pneumonia whereas the deaths happened due to blockages of oxygen supplies.