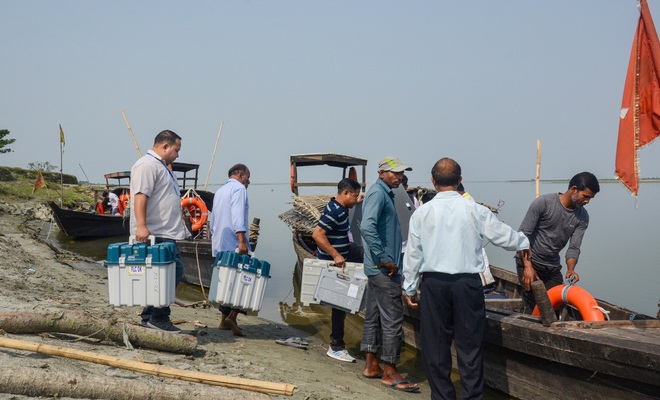 Officials board a boat to travel to polling centres in Dibrugarh, Assam. PTI

Tight security arrangements have been put in place in 30 of the 294 Assembly constituencies in West Bengal and 47 of the 126 in neighbouring Assam that go to the polls in the first phase of voting tomorrow.

A total of 732 companies of Central Armed Police Forces (CAPF) had been deployed in West Bengal for the first phase, said Vivek Dubey, Special Police Observer. Over 73 lakh voters will decide the fate of 191 candidates.

The SC has stayed the operation of a Calcutta HC order that led to reinstitution of several criminal cases against CM Mamata Banerjee’s poll agent, SK Supian, in connection with Nandigram protests against acquisition.

The seats in West Bengal where elections are to be held in the first phase include all constituencies in Purulia and Jhargram and some segments in Bankura, Purba Medinipur and Paschim Medinipur districts. In Jhargram, 11 paramilitary personnel would be deployed per booth, the highest for any election held in the state so far, officials said.

Taking into account the possibility of violence, the polling in West Bengal is being held over eight phases. In the 2019 Lok Sabha elections, the state had reported nearly 700 cases of violence.

The ruling TMC and the Opposition BJP, the two main contenders in the fray, have often accused each other of violence. The BJP alleged TMC goons were behind the murder of its over 130 party workers since 2016.

The first phase of polling will decide the electoral fate of 191 candidates, including 21 women. The TMC had won 27 of these 30 seats in 2016 when the BJP was yet to become a major player in West Bengal. In Assam, the first phase is crucial for the saffron party to retain power in the state and achieve its ‘Mission 100-plus’. In 2016, the BJP and its ally Asom Gana Parishad (AGP) had bagged 35 (BJP 27, AGP 8) out these 47 constituencies.

In the 2019 Lok Sabha polls, the BJP-AGP alliance had again led in 40 of the 47 seats. The saffron party is, however, expected to face challenges in upper Assam from Assamese-speaking people’s opposition to the Citizenship Amendment Act and the formation of two new anti-CAA political parties, Assam Jatiya Parishad (AJP) and Raijor Dal. The EC had announced three-phase polling in Assam.

The constituencies going to polls in the first phase include Majuli (ST) from where Chief Minister Sarbananda Sonowal is seeking re-election, and Nazira, pocket borough of Leader of Opposition and Congress candidate Debabrata Saikia. As many as 81,09,815 voters, including 4,032,481 women, will cast their votes across 11,537 polling stations.