From March, 45-plus with comorbidities also to be covered I 1.21 crore vaccinated so far

From March 1, all elderly aged 60 years and above and the 45 plus with underlying health conditions will get free Covid vaccination at designated government health facilities as the country commences the second phase of the inoculation drive that started on January 16.

The Cabinet chaired by PM Narendra Modi today decided to bear the cost of jabs for these categories, provided they seek doses at the 10,000 designated facilities in the government sector.

States told to speed up inoculation

Announcing the decision, Information and Broadcasting Minister Prakash Javadekar said: “There are 10 crore people in the 60-plus segment. The Health Ministry will soon clarify which comorbidities will be covered for those aged 45 and above. If vaccines are taken at the 20,000 private facilities, people will have to pay.”

The Health Ministry is working out the vaccine cost and will announce it soon, said the government, which had borne the cost of vaccination for health and frontline workers covered in the first phase. India has so far administered 1,23,66,633 doses with an overall coverage of eligible beneficiaries hovering at 60 per cent.

The government further clarified that the efficacy of Indian vaccines Covaxin and Covishield had been firmly established worldwide and several countries had received these vaccines. 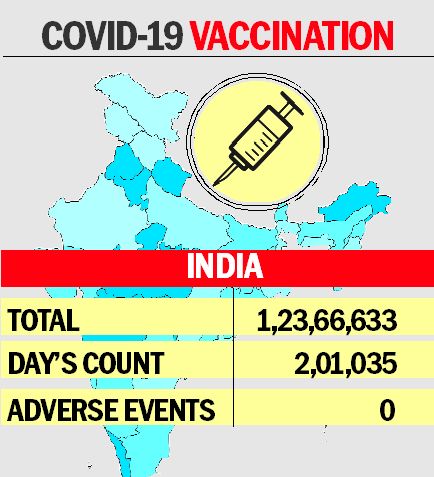 The government is aiming to speed up vaccinations to ensure early herd immunity and minimise any adverse impact of a second wave with infections rising in some states.

The Centre has sent teams to 10 states, including Punjab, Maharashtra, Kerala, Chhattisgarh, MP and J&K, to detect the reason behind the surge and guide local governments in containment.

Punjab, Maharashtra, Haryana and J&K are among the states that reported an increase in active cases over yesterday while Kerala reported a drop. The Centre has also written to high-burden states to escalate inoculation in districts reporting a rise in cases and the positivity rate.

Punjab’s SBS Nagar, Kapurthala and Muktsar as well as J&K’s Pulwama are among districts of worry.