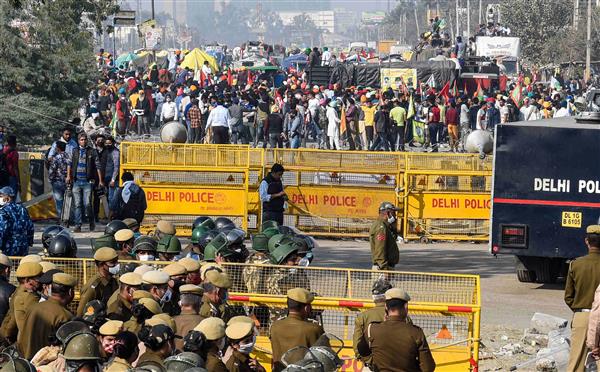 A PIL was filed in the Supreme Court on Friday seeking removal of agitating farmers from roads in Delhi as commuters have been facing blockades since November 26 when thousands of farmers from Punjab, Haryana and Western UP descended on the national capital.

Petitioner Rishabh Sharma, a resident of Shashi Nagar in Delhi, said: “Since the virus is spreading rapidly and the cases of COVID19 are increasing day-by-day in Delhi, it is paramount that this protest be stopped on immediate basis.”

He demanded that Delhi borders should be opened and protesters should be shifted to a designated place where they should follow norms, including physical distancing, to check the spread of COVID-19.

The petitioner contended it was “very necessary” to remove the gathering as it blocked roads for all emergency and medical services needed to stop the increasing spread of COVID-19.

Many people were frequently travelling to Delhi from different states in order to get treatment in big government hospitals situated in the capital, Sharma pointed out.

He submitted “that life of lakhs of people protesting at Delhi Borders is at immediate threat since the virus is very contagious and if by chance this coronavirus disease takes the shape of community spread, it will cause a havoc in the country”.

Sharma sought “immediate intervention” of the top court to restrict the mass gathering of people at a particular place.

The petitioner said the Delhi police allowed protesters to hold demonstration peacefully at Nirankari Ground, Burari, in North Delhi, but despite that, they blocked the borders of Delhi, preventing people from using roads.

Citing the top court’s recent verdict in Amit Sahni versus Commissioner of Police & Others, Sharma said protests which blocked the public way and caused grave inconvenience to commuters, such protests can’t be allowed, and an indeterminable number of people can’t assemble wherever they choose to protest.

The petitioner said he moved the top court as the persons affected by such irresponsible acts of the protestors and the State were not in a position to remove them, for they were huge in number even as the protest caused a lot of trouble to citizens.

Noting that COVID-19 was declared a pandemic by the WHO on March 11 and the government has issued various guidelines to restrict public gatherings to a maximum of 50 people, Sharma said despite that more than three lakh farmers had gathered on Delhi borders to protest against the farm laws.