In his hometown Kanpur, Jain still rides an old scooter and his house was extremely modest though he recently renovated it 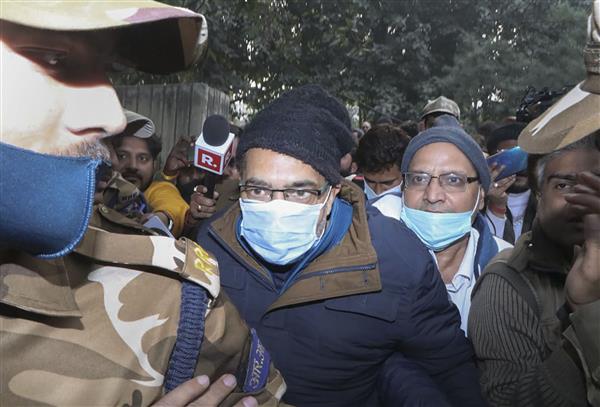 Businessman Piyush Jain, accused of tax evasion, being produced at a court in Kanpur. PTI

For one who has thrown up the biggest cash haul in the history of the country, Piyush Jain can easily be mistaken as just another common man.

For one who stacked up crores in cash at his house and its walls, Jain’s lifestyle has been astonishingly simple.

In his hometown Kanpur, Jain still rides an old scooter and his house was extremely modest though he recently renovated it. He owns a Qualis and a Maruti and when cash spilled out of his house, his neighbours were shocked.

“He was just another businessman in the perfume business and we never imagined that he would have so much cash stacked in his house. He never flaunted his wealth and even his lifestyle was very middle class,” said RK Sharma, who lives in the Chippatti locality where Jain also lives.

Jain’s father lives mostly in Kannauj while he and his brother Amrish live in Kanpur. Jain learnt the art of making perfumes and edible essences from his father, who is a chemist.

Jain, 52, was born in Kanpur and completed his education from there. He then joined the family business in Kannauj though he continued living in Kanpur.

His acquaintances claim that he had no political connections or friends in power.

“We have never seen him visit any politician or political party office. He never claimed to know any influential person either,” said one of his associates, requesting anonymity.

Contrary to popular belief, Jain is in no way related to Pampi Jain, the Samajwadi Party leader who had launched the ‘Samajwadi Itr’ in Lucknow last month.

“The only thing common between the two is that they are both in perfume business, they both live in the same locality and both belong to the Jain community. Pushpraj Jain a.k.a. Pampi Jain is a SP MLC and it was he who launched the ‘Samajwadi Itr’,” said Kunal Yadav, a resident of Kannauj.

However, media reports connecting the two—Piyush Jain and Pampi—have led to a political slugfest in Uttar Pradesh.

Chief Minister Yogi Adityanath said on Monday that now he knows why ‘some people’ were opposing demonetisation.

“The black money is now coming out of walls,” he said.

Samajwadi Party president Akhilesh Yadav clarified that “this raid should not be linked with SP at all. Piyush Jain has no relation with SP MLC Pampi Jain”.

SP leaders, in fact, claim that Piyush Jain’s family is inclined towards the BJP and always supported the ruling party.

As political parties battle over Jain’s affiliation, the party now seems to be over for this businessman.

As a senior official said, “Accumulating so much wealth is not possible without any patronage. As investigations progress, the truth will tumble out. As things stand, Piyush Jain can prepare for a long stint behind the bars and his pleasing perfumes may not be able to make life less unpleasant for him.”

On Monday, Jain was remanded to 14-day judicial custody by a local court after he was arrested under Section 132 of CGST Act.

“Jain has accepted that the cash recovered from the residential premises is related to sale of goods without payment of GST,” said a GST official. —IANS