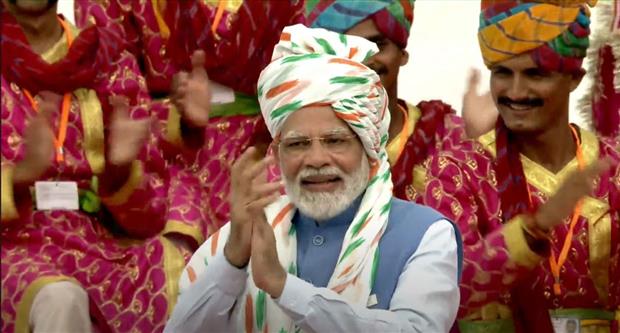 The safa trail also had similar tricolour stripes as the headgear Prime Minister Narendra Modi wore on the occasion. A video grab

In line with the “Azadi ka Amrit Mahotsav” celebrations, Prime Minister Narendra Modi chose to wear a white safa with tricolour stripes and a long trail for his 76th Independence Day look.

The August 15 ceremony is particularly significant this year as it marks the 75th anniversary of the country’s Independence, with the government launching a host of exercises to add to the verve around the celebrations.

Wearing the traditional kurta and churidar paired with a blue jacket and black shoes, Modi hoisted the National Flag at the ramparts of the Red Fort and addressed the nation for the ninth consecutive time.

The safa trail also had similar tricolour stripes as the headgear Modi wore on the occasion.

The Prime Minister is known for his tradition of donning flamboyant and colourful turbans for his Independence Day and Republic Day looks since 2014.

Last year, he wore a saffron turban with red patterns and a long pink trail.