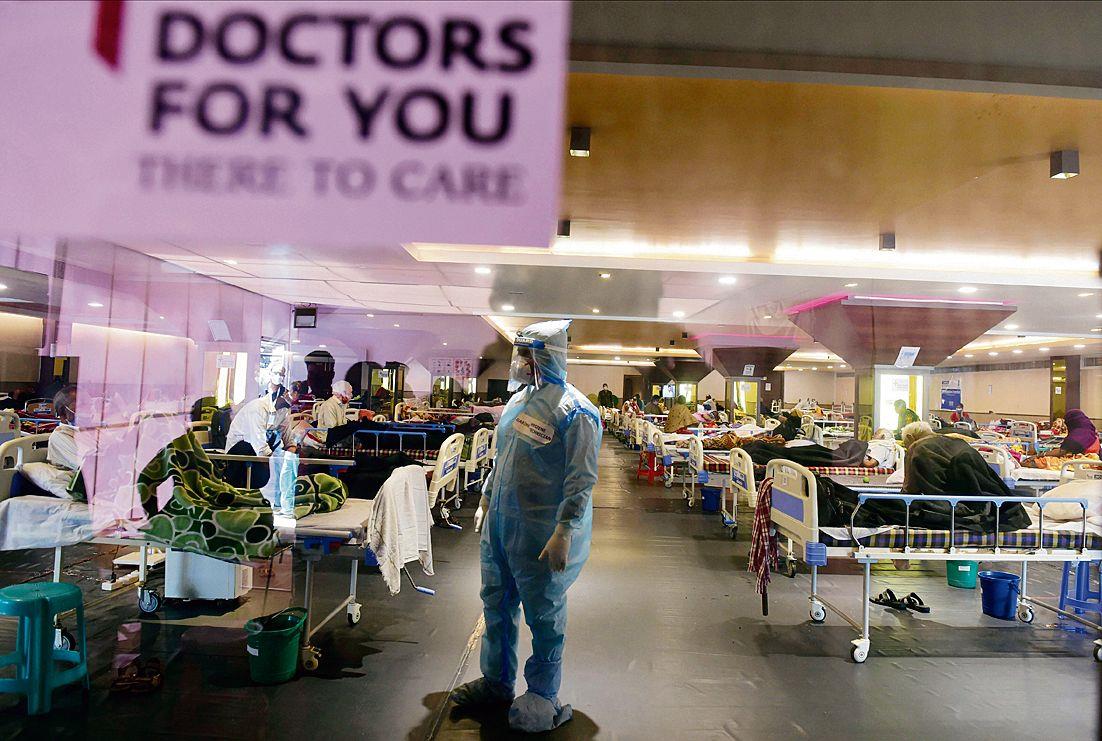 A health worker at a Banquet Hall, converted into an isolation centre, in New Delhi.

The national capital on Sunday became the test case for collapsing health systems across the country as ICU beds reached 100 per cent capacity after Covid-19 cases surged nationally with record 2,61,500 daily infections and 1,501 deaths in 24 hours.

India’s case positivity rate doubled alarmingly in 12 days from 8 to 16.69 per cent and the weekly positivity rate, a major indication of infection, rose from 3.05 to 13.54 per cent.

Delhi today reported a whopping positivity rate of 30 per cent with Arvind Kejriwal becoming the first Chief Minister to write to the Centre saying less than 100 ICU beds were left in the city.

The CM urged Prime Minister Narendra Modi to order 7,000 out of 10,000 Union Government hospital beds to be reserved for Covid patients with immediate effect.

The scale of the unfolding human tragedy was evident in the capital today with the families of Covid deceased reporting shortages of hearses to carry the dead. The Delhi Government has now ordered district magistrates to arrange vans for the purpose. The bodies could be seen lying outside mortuaries of many hospitals here with crematoriums’ managers reporting “unimaginable load of last rites”.

Testing and tracking remains woefully low with private lab test bookings taking two to three days on an average and people queuing up in hundreds outside several private labs just to get themselves tested.

Gayatri Kumar, a South East district resident who tested positive on Wednesday, is yet to be contacted by anyone in the Delhi administration for contact-tracing.

“My mother tested positive on Wednesday, but no one from the Delhi administration has contacted our family yet. We are unable to test our mother’s oxygen saturation because medical shops have run out of oximeters and online sale is not before two weeks. Oxygen cylinders are not available anywhere,” said Kavita, Gayatri’s daughter who says her mother’s breathing troubles are compounding.

The situation is expected to worsen in the coming days with the Delhi Government today notifying that in the 115 private hospitals where 2,262 ICU beds and 8,561 ward beds had been reserved for Covid-infected, ICU beds had reached 100 per cent capacity and ward beds 90 per cent capacity. New Delhi has been the third highest contributor to daily national Covid load for nearly a week now with cases above 25,000 and deaths above 160 and counting. The capital is just a mirror to the larger health system challenges most cities are today facing.

At least six Covid-19 patients died in the ICU of Government Medical College Hospital in Madhya Pradesh’s Shahdol late on Saturday night allegedly due to low pressure in the medical oxygen supply. — PTI