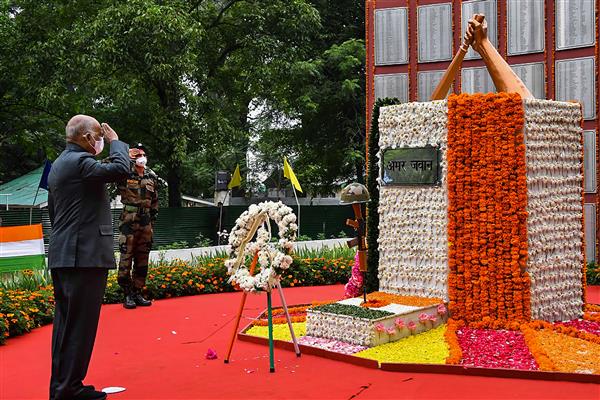 Bad weather on Monday forced the cancellation of President Ram Nath Kovind's visit to Drass in Ladakh to pay homage to martyrs on the 22nd anniversary of the Kargil Vijay Diwas, officials said here.

It is for the second time in three years that the President could not fly to Drass for the Kargil Vijay Diwas celebrations.

Officials said the President's flight could not take off to Drass due to bad weather.

In 2019, bad weather had prevented Kovind from visiting Drass and instead he had paid tributes by laying a wreath at a war memorial at the Army's 15 Corps headquarters in Badamibagh here.

The celebrations were not held in 2020 due to the Covid pandemic.

The officials said the plan B was put into motion following the cancellation of the plan A (visit to Drass) and the President visited the Baramulla War Memorial in north Kashmir to pay homage to the martyrs.

In 1999, the Indian armed forces defeated attempts by Pakistan to capture strategic heights in Kargil. It was named 'Operation Vijay' (victory).

The President is likely to visit the High Altitude Warfare School at the famous ski-resort of Gulmarg after Baramulla and would also interact with troops there, the officials said.

From Gulmarg, he would fly to the Badami Bagh Cantonment from where he would go to the Raj Bhavan, they said.

After lunch at the Raj Bhavan, the President is likely to interact with the members of the Unified Head Quarters, the top-level security group, in Jammu and Kashmir.

On Tuesday, Kovind would address the 19th annual convocation of the University of Kashmir at SKICC auditorium here, the officials added.

He would leave for Delhi on Wednesday morning. PTI