Protest at Mumbai's KEM Hospital after staffer dies on duty

Employees seek job, compensation for the family of the deceased 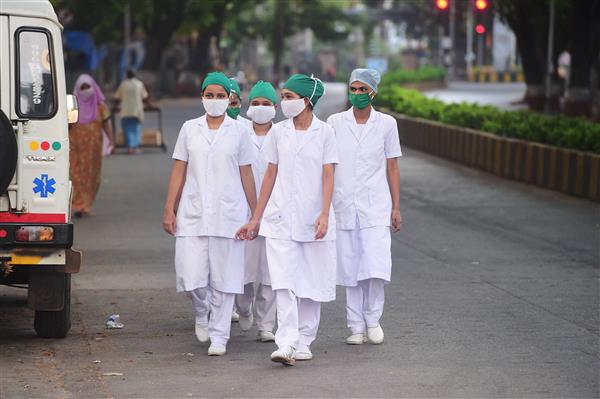 Employees of the civic-run KEM Hospital in Mumbai, including doctors, nurses and other paramedic staff, held protests this morning after an employee died on duty on Sunday evening.

According to the protesting employees the staffer, who was employed as a daily wager, was showing symptoms of coronavirus for the past several days but was denied leave by the hospital management.

He was on duty on Sunday when he developed breathlessness and died within the hospital premises, according to the protesting doctors.

However, it is not clear whether the deceased employee had contracted the Covid-19 virus as his test report was awaited.

The protesting employees said the family of the deceased worker should be compensated with a job and financial support by the government.

Video footage uploaded on social media showed body bags left on stretchers in the empty hospital corridors as doctors, nurses and other employees protested outside.

According to those who uploaded the footage, the mortuary of the KEM Hospital was already full and bodies wrapped in blue body bags were left in the corridors.

Hospital authorities said the Class IV employees who had been hired to wrap the bodies of the deceased Covid-19 patients did not turn up for work regularly.

Later in the day, Dr Hemant Deshmukh, Dean, KEM Hospital held a meeting with leaders of the hospital union and assured them of treatment.

He told the union that staffers would be quarantined and treated at Mahatma Gandhi Hospital if they fall ill.