Will fly at a low altitude, pull up vertically and conduct rolls 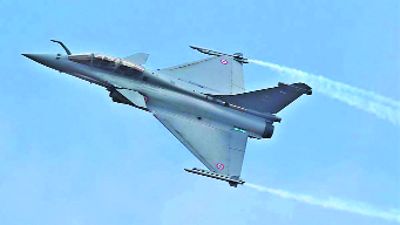 Rafale fighter aircraft will make a debut in the Republic Day flypast this year.

Rafale fighter aircraft, inducted into the Indian Air Force (IAF) in September last year, will make a debut in the Republic Day flypast this year.

“The flypast will culminate with a single Rafale aircraft carrying out a ‘Vertical Charlie’ formation,” said Wing Commander Indranil Nandi.

On the “music front”, there is a unique story about three brothers in the forces’ musical bands. Two of them will be at the parade this year.

Warrant Officer Ashok Kumar, who has been leading the IAF band contingent for the past 13 years, is set to make history. This is the 26th consecutive year when he will be making an appearance. His brother, IAF Sergeant Anil Kumar, will be part of the martial band. Their third sibling, Naik Subhash Kumar won’t be part of the parade this year. — TNS