Digvijaya's remarks on surgical strikes ridiculous, armed forces do not need to give proof: Rahul Gandhi : The Tribune India

Digvijaya's remarks on surgical strikes ridiculous, armed forces do not need to give proof: Rahul Gandhi

Said he and the party completely disagreed with his statement 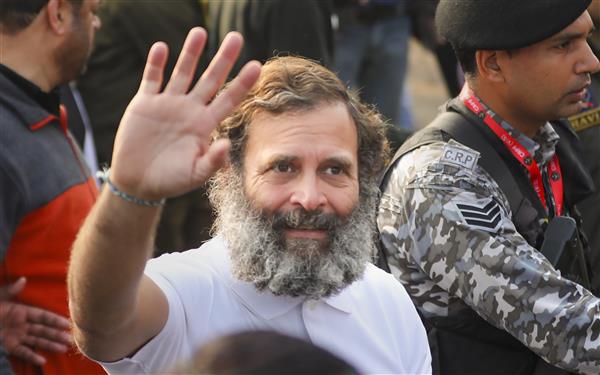 Snubbing Digvijaya Singh for questioning surgical strikes, Congress leader Rahul Gandhi on Tuesday termed his comments "ridiculous" and said the armed forces are doing their job "exceptionally well" and do not need to give any proof.

Gandhi, who faced a volley of questions from the media on Singh's remarks on surgical strikes and the Pulwama terror attack, said he and the party completely disagreed with his statement.

"There are people who will say ridiculous things during conversation. I am sorry to say so about a senior leader, he said a ridiculous thing," Gandhi told a press conference here.

"We have full trust in our army. If army performs any task, there is no need to give any proof. I completely disagree with his statement and this is the official position of the Congress party that it is personal point of view of Digvijaya Singh," he added.

Singh on Monday had questioned the surgical strikes and accused the government of peddling lies.

Addressing a public meeting during the Bharat Jodo Yatra in Jammu and Kashmir, Singh alleged that the government did not agree to the CRPF request of flying its personnel from Srinagar to Delhi and 40 soldiers sacrificed their lives in Pulwama in 2019 to a terror attack.

"They talk of surgical strikes. They claim to have killed so many people but no proof is given. They are ruling by peddling a bundle of lies," the former Madhya Pradesh chief minister, who has often courted controversy with his comments, said.

Asked about action being taken by the Congress against Singh, Gandhi said the Congress is a democratic party and "not a dictatorship".

"We don't run our party on the principle of coercion. We don't appreciate Singh's personal views. But views of the party are above Digvijaya Singh's views. The views are generated from the conversation within the party. I would like to assure you that his views...are not views that are held by the centre of the party," he said.

"We are absolutely clear that armed forces do a job. They do the job exceptionally well. They don't need to be providing proof for anything," he said.

Gandhi said it is in the culture of the Congress to allow conversations. "Some times when those conversations happen and people who have extreme views tell their views. However, in BJP and RSS there is no practice of conversation. Once they decide anything and no body can talk after that," he added.