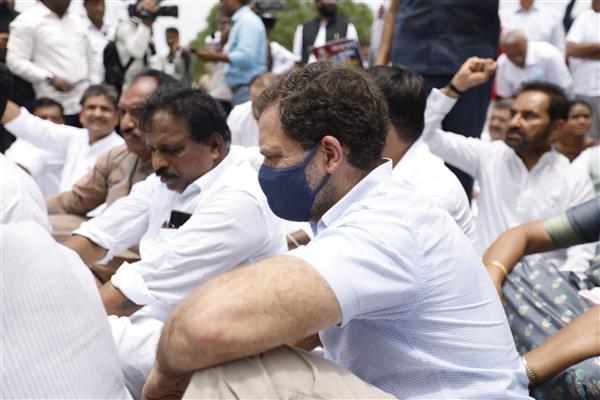 In a scathing attack on Prime Minister Narendra Modi, Congress leader Rahul Gandhi on Wednesday accused him of running a “dictatorship” where the MPs are “arrested” and “suspended” for asking people’s questions to the “king”.

Gandhi’s remarks came after the suspension of 24 opposition MPs in Lok Sabha and Rajya Sabha for disrupting proceedings in Parliament and the detention of Congress leaders who were protesting on streets against the questioning of party chief Sonia Gandhi in the National Herald case and the alleged “misuse of agencies”.

In a Facebook post in Hindi, Gandhi said he is putting out the 10 questions that had to be asked of the “king”. He flagged concerns over issues like unemployment, the Agnipath scheme, high fuel prices, border intrusions, the promise of Minimum Support Price (MSP), farmers’ income, and the falling value of the Rupee among others.

“But look at his dictatorship, the prime minister got so angry on being asked questions that he got 57 MPs arrested and 23 suspended,” Gandhi said.

Twenty MPs in Rajya Sabha and four in Lok Sabha were suspended following continuous protests by opposition parties for an immediate discussion on issues of price rise and GST levy on rice, flour, curd and other daily use items.

Gandhi asked why unemployment was the “highest in 45 years” and also what happened to the promise of two crore jobs every year.

“Why are you snatching the food of the people by imposing GST on everyday food items like curd and cereals,” the former Congress chief asked.

Gandhi also asked when will the people get relief from the sky-high prices of cooking oil, petrol-diesel and LPG cylinder.

Why did the rupee cross 80 against the dollar, he said. He also said that not a single recruitment had been in the army for two years and asked why the youth are being forced to become ‘Agniveer’ on a four-year contract.

“Chinese army has entered our borders in Ladakh and Arunachal Pradesh, why are you silent and what are you doing?” he said in his sixth poser to the government.

Claiming that insurance firms made a benefit of Rs 40,000 crore through crop insurance, Gandhi asked why the government was silent on its promise of ‘doubling farmers’ income’ by 2022.

In his ninth poser, Gandhi asked why the 50 per cent discount available on senior citizens’ rail tickets was discontinued and why the government did not have money to give discounts to the elderly when it can spend money on promotion.

He said the list of questions is very long but the Prime Minister should first answer these 10 questions.

“Threatening the Congress party will not end your accountability, we are the voice of the people and will continue to raise their issues,” Gandhi asserted.

Earlier in the day, Gandhi said while the “king” is afraid of facing questions in the temple of democracy, “we well know how to fight dictators”.

“Why is a cylinder costing Rs 1053? Why GST on curd and cereals? Why mustard oil for Rs 200? The ‘king’ arrested 57 MPs and suspended 23 MPs for asking questions on inflation and unemployment,” Gandhi said in a tweet in Hindi.