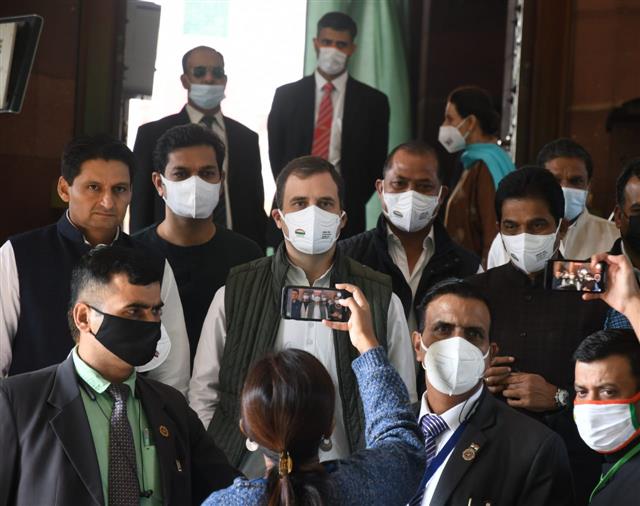 Congress MP Rahul Gandhi on Tuesday submitted in the Lok Sabha a list of farmers who died during the farm laws agitation.

Speaking during Zero Hour, Gandhi, who had also given an adjournment motion notice in Lok Sabha seeking compensation for the families of farmers who died during farm laws protest, said more than 700 farmers died, however, Agriculture Minister Narendra Singh Tomar told the Parliament that “he had no record of the deaths”.

“Almost 700 farmers were martyred. The Prime Minister accepted his mistake when he apologised for making anti-agriculture law. The Punjab government has given compensation to the families of those who were killed. So, what I want to say is that here are the names of all those who died in the agitation and that they should be given their due since the Prime Minister has also admitted his mistake,” Gandhi said.

He told the House that the Congress government in Punjab had paid Rs 5 lakh compensation each to the families of 403 deceased farmers in the state, and provided jobs to 152 of their relatives.

In addition to the list of 403 deceased farmers from Punjab, Gandhi said he was also providing names of those from places outside Punjab, including Haryana, compiled from public records.

“The Prime Minister himself has said that he has made a mistake. He has apologised to the nation. Well, as a result of that mistake, 700 farmers have died,” he said.

Earlier too, Gandhi had slammed the Centre for claiming that there is “no record” of the farmers who had died in the protests.

The government in a reply to Parliament had said that it had not kept track of farmers who lost their lives in the agitation against the farm laws and hence the question of compensation did not arise.