Rebels head back to Jaipur | 3-member panel to address grievances 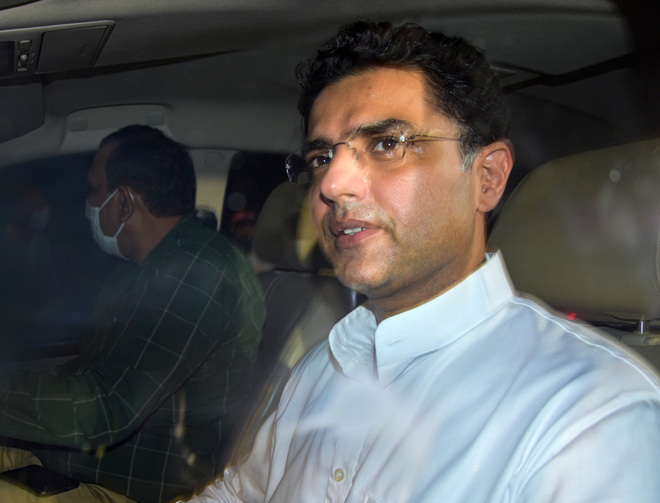 The month-long crisis in the Rajasthan Congress ended on Monday with rebel Sachin Pilot calling a truce with the party and dissident MLAs heading home.

The state government was marked safe ahead of the August 14 Assembly session after Pilot, who had rebelled against Chief Minister Ashok Gehlot, met Congress leader Rahul Gandhi here and buried the hatchet.

The Congress later said the two leaders had a “frank, open and conclusive discussion and Pilot committed to working in the interest of the Congress and the party government in Rajasthan”. Party chief Sonia Gandhi spoke to Gehlot this evening and decided to set up a three-member panel comprising Priyanka Gandhi, Ahmed Patel and KC Venugopal to “address the issues raised by Pilot and the aggrieved MLAs”. Pilot met the panel members late in the evening.

What was immediately clear was that CM Gehlot had succeeded in the battle of nerves with young Pilot, who ran out of options and decided to return.

As Pilot bought peace with the Congress, rebel party lawmakers began returning to Jaipur today and meeting Gehlot, who recently said he would do whatever the central leadership decided in respect of dissidents.

The first rebel to resurface in Jaipur late tonight after days of staying at a resort in BJP-ruled Haryana was Bhanwar Lal Sharma.

Sharma’s name figures in the FIR which the Rajasthan Congress recently lodged, alleging the MLA’s presence in audio tapes, which also features one Gajendra Singh discussing horse-trading in the state. The Congress has been alleging that Union Minister Gajendra Singh Shekhawat figured in the tapes, a charge the latter had rubbished.

This development paves the way for stability of the Gehlot-led Congress government in the state, with the party regaining the original strength of 107 MLAs in the 200-member House.

These 107 MLAs include six former BSP MLAs, who last year merged their legislative party with the Congress.

On the political front, the Congress scored two points by pushing Pilot to a corner and forcing him to return today. One, it prevented another young leader from going to the BJP; two, it sent out a message that dissidence won’t be condoned.

Even as it played firm, the top Congress leadership had kept doors open for Pilot and his loyalists. Asked if Pilot, who was sacked as state Deputy CM and party chief after he missed two CLP meetings in Jaipur, would be reinstated, a top Congress functionary said “no”. Pilot’s previous demand to remove Gehlot stands buried with the CM emerging stronger in the fight with his rival.

He managed to keep party MLAs together and foiled any attempt to dislodge him. Pilot and 18 other rebel MLAs had been fighting the Congress in the High Court for a month, challenging the Assembly Speaker’s disqualification notices to them under the anti-defection law.

Though the Pilot camp secured a stay from the HC, Gehlot moved strategically to call an Assembly session to take a trust vote. The plan of calling the Assembly and seeking a trust vote was key to the Congress strategy of taking the steam out of rebel MLAs, who would have faced disqualification in the House had they defied the whip to vote for the Gehlot government.

Also, rebel MLAs had started to dither of late and some were in touch with Gehlot as nothing concrete was coming their way after Pilot’s original plan to secure the support of 30 rebel MLAs fell flat. “I told you I won’t join the BJP. My stand has been vindicated today,” said Pilot.

It remains to be seen now as to how Pilot reconciles with Gehlot, who called him “nikamma, nakaara” in public. AICC sources didn’t rule out a central organisational role for Pilot. As part of the Pilot-Congress truce, the Rajasthan Congress will withdraw all cases against rebels and accommodate some should Gehlot agree to a state Cabinet reshuffle later.

Ex-dy CM may be moved to central hierarchy

A top Congress leader ruled out reinstatement of Sachin Pilot as state Deputy CM and party chief. AICC sources, however, didn’t discount the possibility of a central organisational role for the ex-Dy CM

Some rebels may be adjusted in Cabinet

As part of the Pilot-Congress truce, Rajasthan Congress will withdraw all cases against rebels and accommodate some in the state Cabinet should Gehlot agree to a Cabinet reshuffle