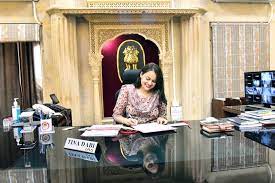 A man from Rajasthan's Dungarpur was arrested for allegedly trying to dupe people over WhatsApp using photos of celebrated IAS officer Tina Dabi.

The youth put up a display picture (DP) of Tina Dabi. Pretending to be Dabi, he would then message unsuspecting people and ask for Amazon gift cards of various amounts. His modus operandi would seem genuine as his texts were in flawless English, reports India Today.

UIT Secretary (RAS) Sunita Choudhary said she received a message from the fraudster’s number in impeccable English on Monday evening, which led her to believe that it was actually Tina Dabi who had texted her. “I thought she had some work. However, the fraudster sought Amazon gift cards from me in the messages. But I don’t use Amazon,” Choudhary said.

Still, to confirm, I called up Tina Dabi, who was shocked to hear about the incident. After learning of the cheating attempt in her name, Jaisalmer collector Tina Dabi immediately informed the SP about the matter.