Parliament to go back to regular working hours from Tuesday 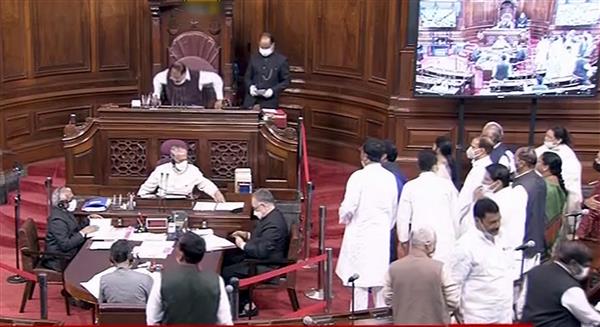 Opposition leaders stage a protest over rise in fuel prices in Rajya Sabha during the Budget Session of Parliament in New Delhi on Monday. RSTV/PTI Photo

Parliament will go back to its normal working hours—from 11 am to 6 pm —from Tuesday.

Until now Lok Sabha and Rajya Sabha have staggered sessions—with the upper house meeting in the morning and the lower house in the evening—in an attempt to adhere to social distancing protocol. Both houses will now get back to their own chambers from Tuesday, unlike currently, when they sit spread across both houses.

Seating arrangements will be notified in the evening, officials said. NCP member Vandana Chavan, who was on the chair, made the announcement in Rajya Sabha before she adjourned the house at 11 am. The announcement was greeted with cheers on a day that saw protests on the issue of fuel price hike leading to multiple adjournments.

In Rajya Sabha, legislative business listed for the day consisted of three bills, including one regarding amendment of Medical Termination of Pregnancy Act. None of the bills could be taken up due to the disruptions.

“On the request from many members from various parties, the Chairman has decided that from Tuesday, the sitting of Rajya Sabha will commence from 11 am to 6 pm as usual timings of the House. Members will sit in Rajya Sabha chamber and gallery only,” Vandana Chavan, who was in the Chair, said. The house adjourned soon after reconvening after protests from the opposition regarding rising fuel prices.

Lok Sabha adjourned for an hour after obituary references to two sitting and seven former members.

Delkar, a seven-term MP, allegedly ended his life on February 22. His body was found in a Mumbai hotel.

Chauhan, a six-term MP, was suffering from COVID-19. He was airlifted to Medanta Hospital in Gurugram last month in a serious condition. He died on March 2.

As the House convened on Monday after recess, Speaker Om Birla paid respect to the departed members on behalf of the Lok Sabha.

Meanwhile, sources said, that the Budget session is likely to be cut short and may conclude before the first phase of elections on March 27.

Several parties had requested that the session, which was originally scheduled to continue till April 8, be curtailed due to the five assembly elections being held in eight phases till April 29. A final decision on curtailment of the session will also be taken by Birla, who met floor leaders of various parties on the matter earlier in the day.