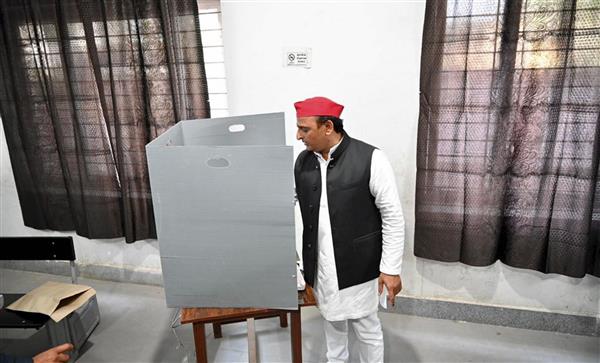 Samajwadi Party President Akhilesh Yadav casts his vote, during the third phase of UP Assembly elections, in Saifai. PTI Photo

Samajwadi Party chief Akhilesh Yadav on Sunday termed the BJP’s allegation that his party has links with the father of an Ahmedabad terror strike case convict as part of a “strategy” in the state assembly polls.

Yadav made the claim while talking to reporters in his village Saifai in Etawah district.

Asked about the BJP allegation that the convict’s father belonging to Azamgarh is an SP leader, Yadav said, “Strict action should be initiated against a terrorist. And if the BJP is levelling the allegation during the elections, the BJP is moving with a strategy.” Yadav’s reaction came a day after the BJP on Saturday dubbed Samajwadi Party as “friends of minority appeasement” and alleged that it has links with terrorists involved in the 2008 Ahmedabad blasts.

Addressing a press conference at the BJP headquarters in New Delhi, Union minister Anurag Thakur released a photograph in which a man, alleged to be the father of one of the convicts in the Ahmedabad serial blasts case, is seen standing with Akhilesh Yadav.

Addressing an election rally in Lakhimpur Kheri, UP Chief Minister Yogi Adityanath too on Sunday accused the SP of being sympathetic towards terrorists, alleging that the father of one of the convicts has links with the party.

A special court on Friday sentenced to death 38 members of terror outfit Indian Mujahideen in the Ahmedabad serial blasts which killed 56 people and injured over 200. It also gave life terms to the other 11 IM operatives in the case.

Former Lok Sabha MP from Kannauj and Yadav’s wife Dimple Yadav, meanwhile, described her party’s pre-poll alliance with Rashtriya Lok Dal and some other political outfits as a “bouquet” with every constituent doing its job.

Dimple Yadav too was speaking to reporters in her village Saifai after casting her vote.

“We have prepared a bouquet (‘guldasta’) of different colours and everyone is doing their job,” she said when asked about her party’s pre-poll alliance.

She also said the election results, which will be declared on March 10, will be “very positive” for the SP.

In his talks with reporters, Akhilesh Yadav also dubbed the BJP as a party of “liars”, claiming that it tried to show UP’s development through photographs of China and the USA “Who used the photos of China? Who used the factories of the US to show development? No party can be a bigger liar than the BJP,” he said.

He asserted after the counting of votes on March 10, the Samajwadi Party will form the government and referring to Chief Minister Adityanath as ‘Baba Mukhya Mantri’, said he “would be given a farewell”.

On allegations of “dynastic” politics being followed by the Samajwadi Party, Yadav asserted, “Those who do not have a family, how can they understand the pain of the family people? Only a family man can understand the problem of inflation and its impact and understand his responsibility towards his family.”