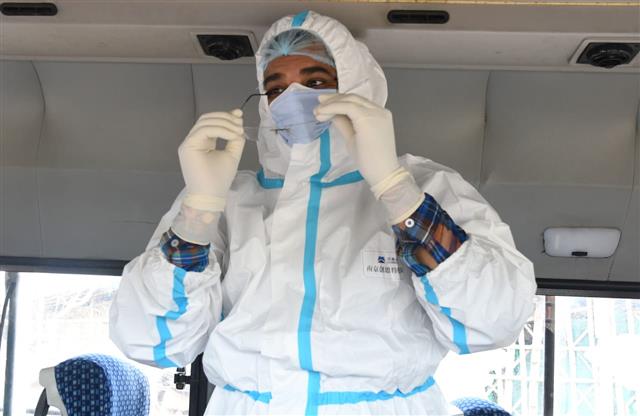 The case fatality rate in the country has declined to 1.96 per cent. Image: The Tribune/Mukesh Aggarwal

With a record single-day increase of 66,999 cases, India's COVID-19 tally mounted to 23,96,637 on Thursday, while the number of patients who have recovered from the disease surged to 16,95,982, pushing the recovery rate to 70.77 per cent in the country, according to the Union health ministry.

The death toll due to COVID-19 climbed to 47,033 with 942 people succumbing to the disease in the last 24 hours, health ministry data updated at 8 am showed.

The case fatality rate in the country has declined to 1.96 per cent.

India crossed the 20-lakh mark in terms of COVID-19 cases on August 7.

According to the Indian Council of Medical Research (ICMR), a total of 2,68,45,688 samples were tested in the country till August 12, including 8,30,391 on Wednesday, the highest number of tests performed in a day.

Of the 942 fresh deaths, 344 were reported from Maharashtra, 119 from Tamil Nadu, 112 from Karnataka, 93 from Andhra Pradesh, 54 each from Uttar Pradesh and West Bengal, 39 from Punjab, 18 from Gujarat, 15 from Madhya Pradesh, 14 from Delhi and 11 each from Telangana and Rajasthan.

Nine fatalities were reported from Odisha, eight from Jammu and Kashmir, six each from Assam and Kerala, five each from Chhattisgarh, Jharkhand and Puducherry, four from Uttarakhand, three each in Bihar, Goa and Haryana and one case was recorded in Tripura.

The ministry stressed that over 70 per cent of the deaths occurred due to comorbidities.

"Our figures are being reconciled with the Indian Council of Medical Research," the ministry said, adding that a state-wise distribution of figures is subject to further verification and reconciliation. PTI