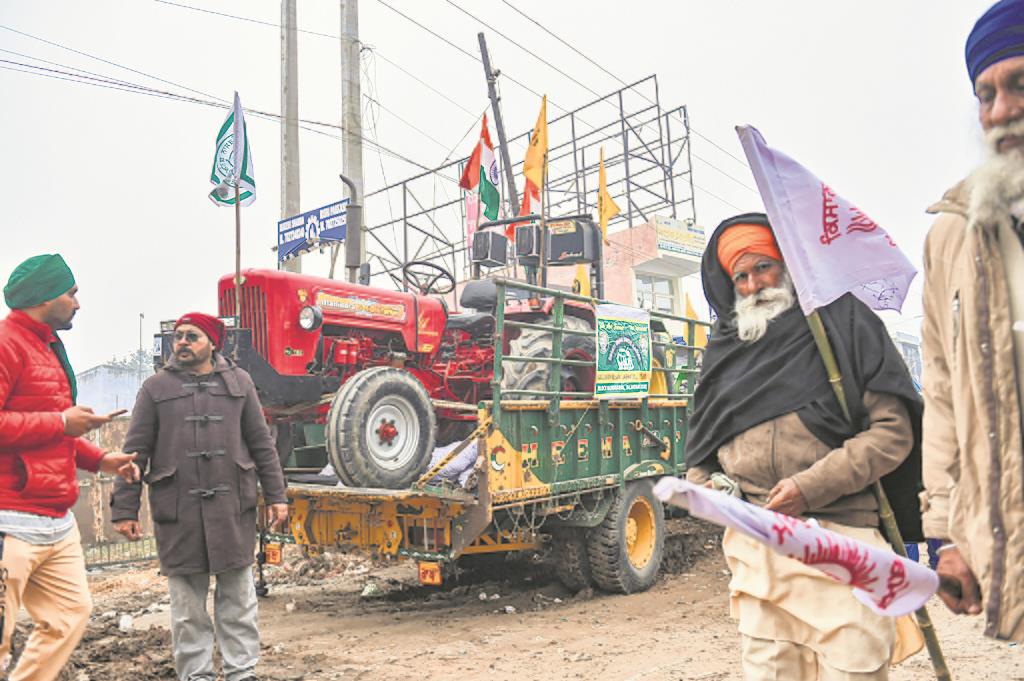 Tractors on a trailer arrive at the Singhu border for the Republic Day protest. PTI

The 11th round of talks between the Centre and farmers’ unions ended in a deadlock. While the unions rejected the government’s proposal, Narendra Singh Tomar, Agriculture Minister, said suspension of agri laws for a mutually agreed period was the “best offer” he had.

CM Capt Amarinder Singh announced jobs for one member each of the state families, who lost their lives in the stir.

Sonepat: A youth in police uniform was nabbed by farmers near Kundli late Friday night. Farm leaders said the youth had confessed he was part of a 10-member team that had been ‘instructed by a cop’ to disrupt the tractor parade on January 26. The youth was presented at a press conference by union leaders. TNS

At the end of the over four-hour-long meeting, that saw discussions for barely 30 minutes, Tomar asked the unions to reconsider his offer and to get back by Saturday, if they decide in its favour. Thanking the unions, Tomar said: “Even though there was nothing wrong in the laws, for the benefit of farmers and respect for their agitation, the government came up with several proposals.”

He said: “You (unions) launched agitations even as you were engaged in talks with us. We didn’t object. The vision (at your end) was lacking.” Later speaking to the media, the minister claimed there were forces which did not want the talks to succeed. “The government made several proposals to end the stir, but when the purity of the movement is lost, no solution is possible,” he maintained.

Sources say Tomar is believed to have told the unions that they should not have issued a statement rejecting the proposal ahead of the talks today.

He also hinted at “differences” among the unions regarding the government’s offer. Fifteen Punjab unions are said to have voted in the favour of the Centre’s offer yesterday.

Unions, meanwhile, said they would now concentrate on the agitation and prepare for the tractor parade. Sanyukta Kisan Morcha leader Balbir Singh Rajewal said: “It will be a unique event. We have told the government and the Delhi Police that we will march peacefully on the Outer Ring Road. If any untoward incident takes place, the government will be responsible.”

While Sanyukta Kisan Morcha leader Yogendra Yadav called it a complete breakdown of talks, Dr Darshan Pal said the talks hit a deadlock as the government refused to offer more than just suspension of the laws.