Riots pre-planned, will not spare the guilty, says Shah 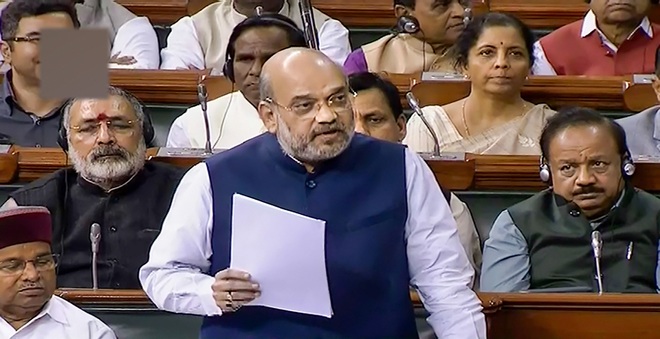 containing/limiting pre-planned” riots in Northeast Delhi to 4 per cent area and 13 per cent population of the Capital”. Rejecting allegations of “pogrom” by Opposition members, he promised that the Modi government would not spare anyone involved in the riots, irrespective of their religion, caste and party affiliation.

Terming the February riots as a “pre-planned conspiracy”, he expressed grief over those killed. “It will be a lesson for the country on what befalls those who indulge in rioting or such acts of violence,” Shah said, replying to a discussion in the Lok Sabha.

He said at least 1,100 rioters had been identified. “We are using face-recognition software. We have also fed Aadhaar and driving licence data into this software. The software has identified 1,100 people. As many as 300 came from UP,” he added. The facial identification technique did not discriminate between communities and religions, he said, to counter allegations of discrimination on the basis of religion.

As many as 40 teams of the Delhi Police had been formed to track the rioters. “Any arrest will be made only where there is hard evidence,” he said.

Amid continuous heckling, the Home Minister rejected charges of “pogrom” and hate speeches by BJP leaders, referring to “aar paar ki ladai” remark by an Opposition leader. He also attacked AIMIM’s Waris Pathan for remarks at a rally.

Congress members walked out midway. “I would like to appreciate the Delhi Police for containing/limiting the violence and not allowing it to spread across the Capital. Their biggest achievement is that they contained the riots in 36 hours. After 11 pm on February 25, no incident was reported. I won’t give figures in “Hindu-Muslim”, but 52 Indians died, 526 were injured, shops of 371 were set ablaze and houses of 142 burnt,” Shah said.