Savarkar is nation’s idol, no compromise on that: Sena on Rahul’s remark 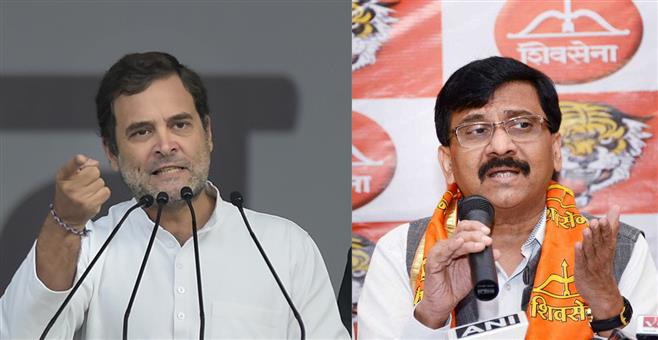 Rahul Gandhi’s “Rahul Savarkar” comment was used by the BJP to corner Congress’ newfound ally Shiv Sena, forcing it to react sharply, but without naming Gandhi.

Cautioning that there could never be any “compromise” about Hindutva ideologue Veer Savarkar who they revered, senior Sena leader Sanjay Raut tweeted in Marathi: “We believe in Pandit Nehru, Mahatma Gandhi, do not insult Veer Savarkar. The wise does not need explaining.”

“Veer Savarkar is an idol of whole country and not just Maharashtra. The name Savarkar denotes pride about the nation and self. Like Nehru and Gandhi, Savarkar too sacrificed his life for the country’s Independence. Every such idol must be revered. There is no compromise on this”, is what the tweet in Marathi broadly meant.

Addressing his party’s “Bharat Bachao Rally” in Delhi, Gandhi, while rejecting the ruling BJP’s demand for an apology for his “rape in India” barb, said “my name is Rahul Gandhi, not Rahul Savarkar” and also that he will never apologise for speaking the truth.

His “rape in India” comment at an election rally in Jharkhand had reverberated in Parliament on the last day of the Winter Session with the BJP launching a fierce attack against him, asking him to aplogise.

Using the “Rahul Savarkar” comment to challenge former ally Shiv Sena, with which they had a bitter parting after the Maharashtra Assembly elections, BJP leaders said they looked forward to what the Sena now had to say on the insult to Savarkar.

“For once Rahul Gandhi is right. He can never be ‘Rahul Savarkar’. Veer Savarkar is a national icon, who has had a civilisational impact on India’s polity and will continue to be revered for generations to come. Five generation of Nehru-Gandhi family can’t measure up to his legacy,” Malviya added.

"He (Rahul Gandhi) is nowhere close to even a single good deed of Veer Savarkar and his greatness. Not just this, he should not even do the blunder of considering himself as ‘Gandhi’. One cannot become ‘Gandhi’ by just keeping his surname as Gandhi.

"Veer Savarkar has sacrificed his entire life for our Matru Bhumi. Using such language for him is an insult to all the great patriots and freedom fighters who have sacrificed their lives. So, Rahul Gandhi must apologise to our nation for yet another irresponsible statement," Fadnavis said.

BJP’s Rajya Sabha MP GVL Narsimha Rao went a step further saying that Gandhi’s “Muslim appeasement politics and mindset” made him “a worthy successor of the legacy of Muhammed Ali Jinnah”. “Rahul is not a Savarkar, he should change his name to Rahul Jinnah. Their entire family should now stake claim to the legacy of Jinnah and not Nehru-Gandhi,” Rao said.

The two right wing parties (the Sena and the BJP) share similar sentiments about Savarkar.

The Sena is a vocal supporter of the Hindutva ideologue Vinayak Damodar Savarkar, popularly known as Veer Savarkar, and so is the BJP. They have also demanded “Bharat Ratna”, India’s highest civilian award, for Savarkar, an idea which the Congress finds unacceptable given the controversies attached.

The Congress has stitched the alliance with the Sena and the NCP to form government in Maharashtra, keeping aside its political and ideological differences.