Self-reliance the way ahead for India as world order changes: EAM on Ukraine : The Tribune India

Self-reliance the way ahead for India as world order changes: EAM on Ukraine 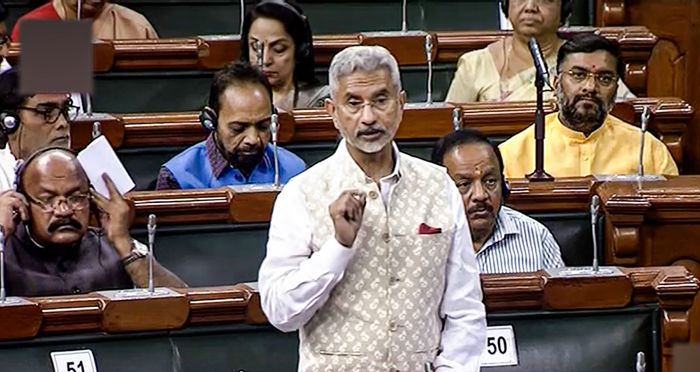 If New Delhi chose any side in the Russia-Ukraine conflict, it was the side of peace, External Affairs Minister S Jaishankar asserted on Wednesday while declaring that Atmanirbhar Bharat, with reduced dependence on the external world, was the way to deal with the changing world order.

Explaining the government’s position on the Ukraine crisis in the Lok Sabha, Jaishankar said India had all along called for immediate cessation of violence and encouraged talks.

In touch with Ukraine neighbours to help med students: Government

The EAM’s statement comes a day after India’s Permanent Representative to the United Nations, TS Tirumurti, had said reports of “civilian killings” in Ukraine’s Bucha city called for an independent probe.

“We encourage talks between Ukraine and Russia, including at the level of their presidents. The PM himself has spoken to both of them…. If India can be of any assistance, we will be glad to contribute,” Jaishankar said, adding that India’s approach would be one to promote dialogue to end the conflict.

The minister condemned civilian killings in Ukraine’s Bucha and supported the call for an independent investigation. However, even while maintaining that India was “strongly against conflict and believed that dialogue diplomacy were the right answers to any dispute”, Jaishankar described Russia as a very important partner.

“Our effort today is to stabilise economic transactions between India and Russia because this is very important for us. Russia is a very important partner in a variety of areas,” he said, ruing political colours attributed to India’s actions by a section of MPs. The minister said that with energy costs spiking, India had to ensure additional burdens were staved off.

“Similarly, fertiliser prices have a direct implication on the livelihood of a majority of our population and food prices. Even the security of the nation is at stake as we maintain our defence posture in the manner that the current security challenges warrant. All these are legitimate pursuits of national interest by India. Attributing a political colouring to it is uncalled for and it is unfair,” Jaishankar said, hailing Operation Ganga as the largest evacuation operation he had witnessed in his career, one that “inspired other countries”. The minister defended the timing of the government advisory to Indians in Ukraine, saying that 4,000 citizens would not have returned had they not taken the advisory seriously.

The remaining 18,000 who stayed back for some time were in a dilemma due to the overall signalling, including the indication by some Ukraine universities resistant to convert to online mode of instruction, he said.

On the way forward, Jaishankar said the world order was changing and the solution was that “we have to be stronger, we have to reduce our dependence on the external world.” It can never be total but the way to deal with the new world order is really Atmanirbhar Bharat, he added.

New Delhi: In a major push towards defence indigenisation, Defence Minister Rajnath Singh will on Thursday unveil the third list of over 100 military systems and weapons, worth more than Rs2,10,000 crore, which will be put under import restrictions under a staggered timeline of over next three-and-a-half years. PTI