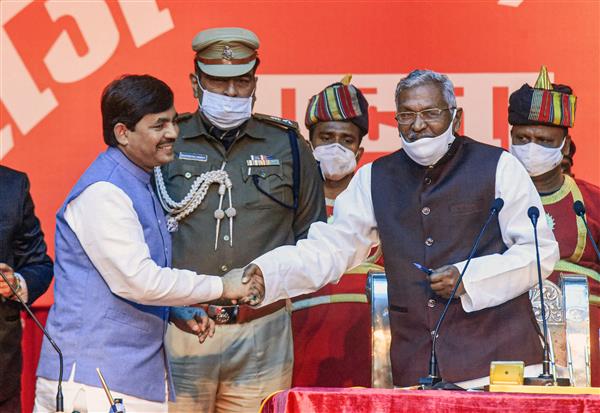 Bihar Governor Fagu Chauhan congratulates Syed Shahnawaz Hussain after taking oath during the swearing-in ceremony for the cabinet expansion of coalition government of NDA at Raj Bhawan, in Patna, on Tuesday, February 9, 2021. PTI

Union minister in the Atal Bihari Vajpayee government and BJP’s national spokesperson Syed Shahnawaz Hussain has finally been rehabilitated in active politics with a position in the Bihar government led by BJP’s partner, JD-U’s Nitish Kumar.

One of Saffron party’s prominent Muslim faces -- apart from union minister Mukhtar Abbas Naqvi and Rajya Sabha member Syed Zafar Islam, Hussain was the first to be administered the oath of office by Governor Phagu Chauhan at a ceremony held in the Raj Bhavan today.

Out of electoral politics since 2014, Hussain was recently named by the BJP as its MLC candidate from Bihar, thus marking his return albeit at the state level.

Having unsuccessfully contested the Bhagalpur seat in the 2014 general elections, Hussain was denied a ticket in the 2019 Lok Sabha election.

He had been working as one of the party’s national spokespersons. More recently he was given the charge of Kashmir in the DDC elections in the newly formed UT. Sources say BJP’s performance in J&K helped his return to place of prominence in Bihar.

His entry in Bihar politics is being viewed with lot of interest. The three- time Lok Sabha MP has been a known baiter of JD-U supremo Nitish Kumar, who he blamed for his Bhagalpur seat being taken away in the last elections.

Meanwhile, with three new faces from the region the BJP has given prominence to Kosi region to improve position in the Seemanchal region. Hussain in particular is expected to help the party’s chances in upcoming Bihar elections where Muslims play a major role.

Hussain is among the 17 leaders, who also include Neeraj Kumar Singh “Bablu”, (a cousin of late actor Sushant Singh Rajput), to be inducted in the first expansion of Cabinet of CM Nitish Kumar after winning the Assembly elections last year.

The Cabinet strength of the Nitish Kumar Government is now 34.

All new inclusions are from the two major allies, the BJP and the JD-U. Smaller allies Hindustani Awam Morcha (HAM) and Vikassheel Insaan Party (VIP) were accommodated when the Cabinet was formed in November last.