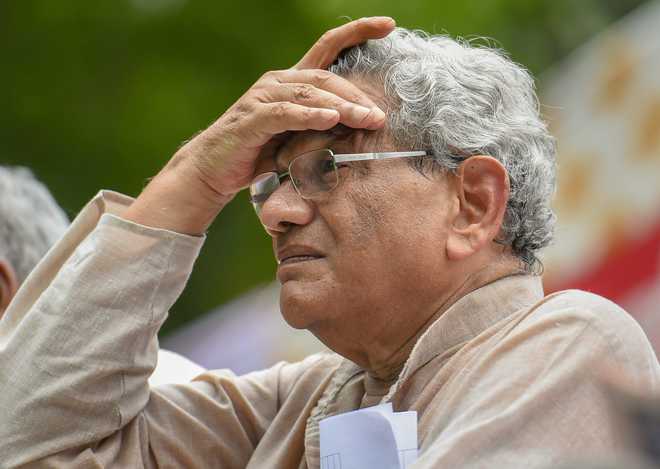 The death of the journalist who would have been 35 on June 9 was announced by Yechury and the CPI(M) Politburo.

Ashish was recovering well at Gurugram's Medanta Hospital, people close to the family said, describing his sudden death at 5.30 am after a two-week battle with Covid as a shock.

"It is with great sadness that I have to inform that I lost my elder son Ashish Yechury to COVID-19 this morning. I want to thank all those who gave us hope and who treated him - doctors, nurses, frontline health workers, sanitation workers and innumerable others who stood by us," Yechury said on Twitter.

Ashish, who studied at the Asian College of Journalism, Chennai, worked in several publications, including the Times of India in Delhi, before moving to Pune.

Journalists who worked with him remembered him as a mild-mannered and warm professional who was knowledgeable and well-read.

"We are deeply sorry to announce the passing away this morning (22 April) of Ashish Yechury, son of Sitaram Yechury and Indrani Mazumdar. He died of Covid- related complications. He was 35,” the CPI(M) Politburo said in statement.

It conveyed its “deepest condolences to Sitaram and Indrani, his wife Swati, his sister Akhila and all other members of the bereaved family".

As news of the death came in, condolences for the family poured in from leaders and others, including Prime Minister Narendra Modi and President Ram Nath Kovind.

The President said he was grieved beyond words to learn about the untimely demise. “In this moment of profound grief, my deepest condolences to Shri Sitaram Yechury, his family and loved ones. May you find the strength to bear this irreparable loss," Kovind tweeted.

"Condolences to Shri Sitaram Yechury Ji and his family on the tragic and untimely demise of his son, Ashish. Om Shanti,” Modi said.

Congress leader Shashi Tharoor said he was devastated by the news. “There is no greater loss for a parent to endure. May you find the strength to bear the inexpressible grief of your loss. My heart goes out to you at this painful time," he said.

"Deeply saddened and pained to hear about the loss of Ashish Yechury. I offer my heartfelt condolences to Comrade @SitaramYechury, his family and friends at this difficult time," tweeted DMK leader MK Stalin.

"My heartfelt condolences to Sitaram Yechury Ji and his family on the loss of his son, Ashish. I hope they find the strength to withstand this tragic loss," Congress leader Rahul Gandhi said in a message on Telegram.

Ashish had also worked at NewsLaundry, IBNLive and Pune Mirror. With PTI