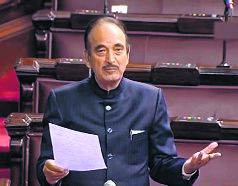 Ever since Prime Minister Narendra Modi’s emotional farewell speech praising Congress leader Ghulam Nabi Azad in the Rajya Sabha, speculation is rife over the political future of the senior leader from Jammu and Kashmir and also the PDP leaders retiring with him from the Upper House.

While some visualised Azad as a potential NDA candidate for the post of Vice President/ Chairperson of the Rajya Sabha or a Governor of an important state, others (considering Congress’ G-23) saw him as a possible saffron face in J&K where the government has plans to hold elections sometime in future.

The BJP’s prospects are well looked after in Jammu region, but in Valley it lacks sufficient talent and also “tall, credible, compassionate faces and leaders who can provide healing touch to the region”. However, those with a contrary point of view said “not much should be read into warm-hearted respect accorded to a senior Opposition leader and the next CM of J&K is expected to be from Jammu”.

Though if read with the PM’s reply to the debate on the President’s address in the Rajya Sabha, some dots can be connected. A day before, Modi had drawn attention to Azad’s easy manner and his comments on J&K and recent DDC/local polls.

BJP leaders are all praise for Azad “who wants the situation to improve in the Valley”. At 71 years, Azad has a few years before he hits the BJP’s unofficial date of retirement from politics (75 years). PDP’s Nazir Ahmed Laway said he hoped that a Bill would be brought in Parliament soon to make J&K a state again. “The PM and the Home Minister have promised in this House that J&K will become a state again. I am confident that a Bill to this effect will be soon brought to the House,” he said. Another outgoing PDP MP Mir Mohammed Fayaz appealed to the PM and the Home Minister to make J&K one state again and restore its special status.