‘This is the national capital. Look at the signal we are sending to the world,’ says a Bench led by CJI NV Ramana 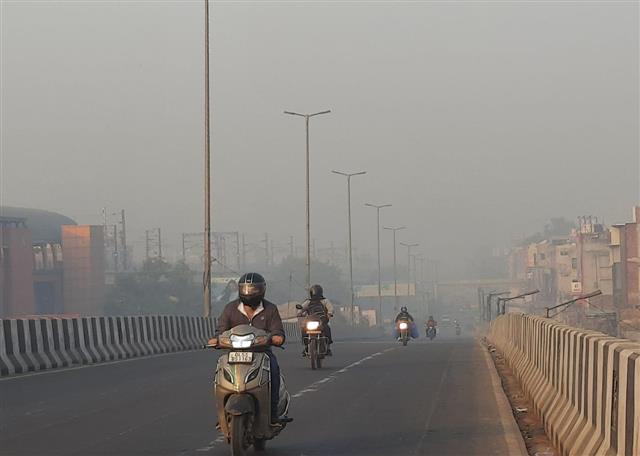 The Supreme Court on Wednesday deferred hearing on the worsening air pollution in Delhi-NCR to Monday even as it said some orders on immediate preventive measures were needed to deal with the emergency situation.

"We take measures when the condition becomes severe...These measures have to be taken in anticipation...based on a scientific statistical model," a three-judge Bench led by CJI NV Ramana said.

“Take the measures for the next two-three days and we will again hear this matter next Monday,” said the Bench - which also included Justice DY Chandrachud and Justice Surya Kant.

“This is the national capital. Look at the signal we are sending to the world. You can stop these activities in anticipation itself so the severe grade does not even become…Suddenly when pollution comes you start sprinkling water, it will not help. If you have a statistical model then there will be a graded response. It has to be science-based,” it said.

The top court had on November 17 refrained from passing any harsh directives on worsening air pollution in Delhi-NCR and deferred the hearing to November 24 after the Centre said the condition would improve after November 21.

However, it had asked the authorities not to lower the guard. It asked the Centre and NCR states to implement in letter and spirit the decisions taken in the emergency meeting held by the Commission for Air Quality Management in NCR and Adjoining Areas.

On Wednesday, the Bench said the government should prepare a scientific model based on previous years' data to determine average air pollution levels in different seasons during the year. This model can be used to take appropriate measures in advance to prevent air quality from getting worse, it noted.

However, the top court made it clear that it intended to pass orders on measures to be implemented by the Centre, Delhi and NCR states to improve the air quality and bring it to a satisfactory level.

It said that in the meantime, if the pollution situation improved and AQI became 100, some of the bans could be lifted and interior works such as electricity, etc, allowed to go on.

The Bench again pulled up the bureaucracy for its “lackadaisical attitude” in dealing with the issue of air pollution and stubble-burning. “We are using common sense to discuss the issues. What is the central and state bureaucracy doing? Why can't they go to the fields, talk to farmers and scientists and devise a permanent solution to prevent stubble-burning?” it said.

Solicitor General Tushar Mehta told the Bench that on November 16 AQI was 403 and now it had improved to 260.

Mehta said dust management directions were being followed and 250 anti-smog guns had been installed, 23 mechanised road sweeping machines and 1007 water sprinklers were also in place. He said 57 construction sites had been closed.

“What is done now is ad hoc. The commission under the act has to conduct a scientific study, so seven days’ data can be there. There has to be a model to see that if measures are taken with wind patterns then there will be a reduction in pollution,” the Bench emphasised.

On behalf of petitioner Aditya Dubey, senior counsel Vikas Singh alleged that farmers were not being fined for stubble burning in Punjab in view of the ensuing Assembly elections.

“We are not concerned. We are concerned only with pollution, the Bench said, adding, “We can’t micromanage such things.”