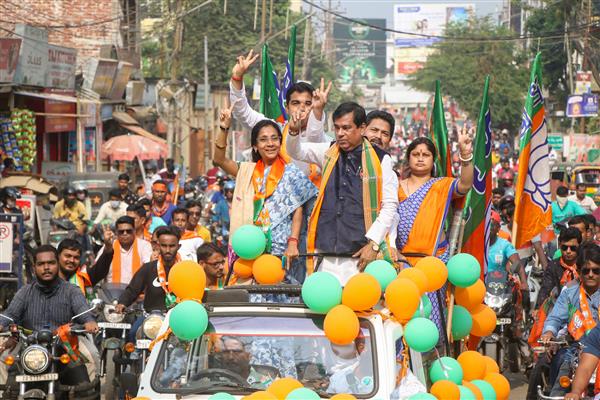 BJP candidate Dipak Majumdar during the last day of the Tripura MC election campaigning in Agartala on Tuesday. PTI

The Supreme Court on Tuesday turned down the Trinamool Congress (TMC) plea to stay Tripura local bodies’ elections scheduled on November 25, saying it’s an “extreme recourse” in a democracy even as it issued a set of directions, including deployment of paramilitary forces in critical areas, to the state government to ensure free and fair elections.

“Postponing elections is a matter of last and extreme recourse. It is our considered view that short of postponing of elections, the apprehensions which have been expressed on behalf of the petitioners by the counsels can be suitably addressed by issuing peremptory directions to the state of Tripura, so as to ensure that the municipal elections take place in peaceful and orderly manner,” a Bench led by Justice DY Chandrachud said.

Acting on the TMC’s plea seeking contempt action against the Tripura Government and other officials for failing to curtail violent incidents against opposition parties in the run-up to the upcoming municipal polls, it ordered reassessment of deployment of paramilitary forces in critical areas and warned of coercive action if its orders were not followed scrupulously. “The DGP and the IGP (law and order) shall hold a joint meeting with the State Election Commission by tomorrow morning for the purpose of assessing the availability of sufficient strength of paramilitary forces drawn from the CRPF for ensuring peaceful conduct of the elections,” it said.

Seeks details of FIRs on violence

The SC sought details of the FIRs registered in view of violent incidents during campaigning and the arrests made in those cases.