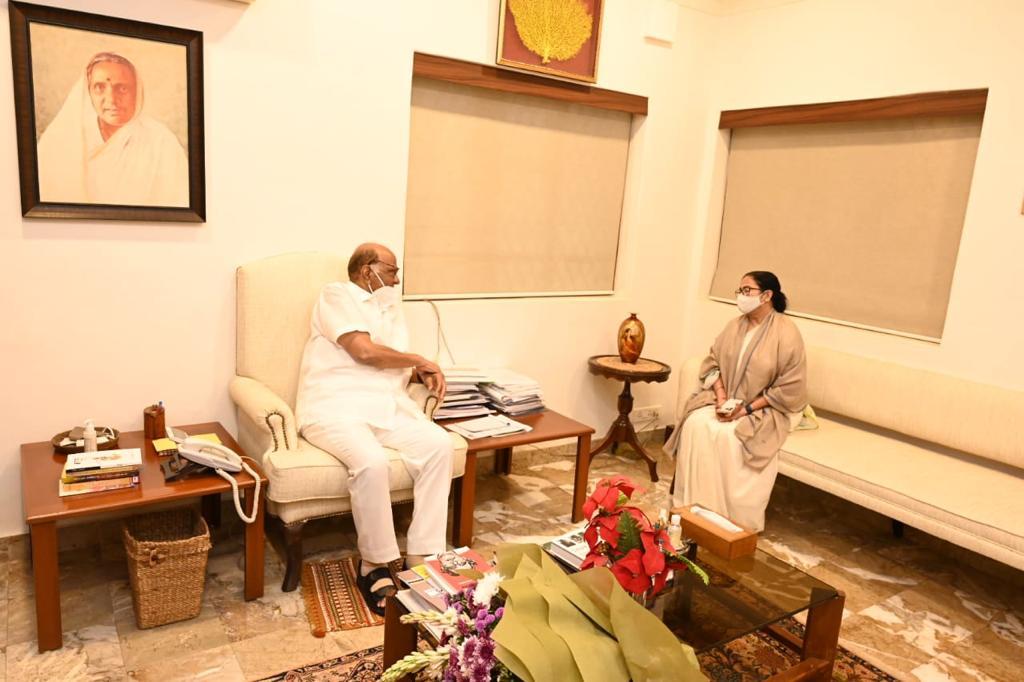 "What is UPA? There is no UPA," Banerjee, the chief of the Trinamool Congress who's on a three-day visit to Mumbai, said after a meeting with Pawar.

On his part, Pawar made a fresh pitch for the unity of opposition parties to fight the Bharatiya Janata Party.

"All those opposed to the BJP are welcome to join us. There is no question of excluding anyone," Pawar told reporters when asked if an alliance without Congress was on the cards.

"We discussed the prevailing situation and the need for all like-minded parties to come together and provide a strong alternative to the BJP," the NCP chief said. "Leadership is not an issue at this point. We need to work together against the BJP," he added.

Banerjee's statement is significant given her own pronounced attempts to breach regional boundaries. It’s also particularly significant given that Pawar’s NCP is part of a triumvirate that makes up the Maha Vikas Aghadi government along with Congress and the Shiv Sena.

Her statement also comes hours after she claimed she’d suggested an advisory council comprising prominent personalities from civil society be set up to give a direction to the opposition to the Congress.

“If all regional parties come together, it would be easy to defeat the BJP,” Banerjee said while interacting with some civil society members here.

"We want to say BJP hatao, desh bachao," she said, adding that her party Trinamool Congress (TMC) will not contest the forthcoming Assembly elections in Uttar Pradesh.

"I don't want my opposition to make their own strategy. So, I am not revealing much," she said.

Banerjee's visit comes amid strain in ties between the TMC and the Congress. After its landslide victory in West Bengal earlier this year, the TMC inducted several Congress leaders into its fold. Recently, 12 out of 17 Congress MLAs in Meghalaya defected to the TMC, making it the principal opposition party.

To a query on if she would lead the opposition alliance against the BJP, Banerjee said she is a "small worker" and wants to continue so.

"Continuous endeavour is necessary in politics. You can't be abroad most of the time," she said in a veiled dig at Congress leader Rahul Gandhi.

"I had suggested to the Congress that there should be an advisory council comprising prominent personalities from the civil society to give a direction to the opposition, but in vain," she said.

Banerjee said the BJP is "not safe" and the need is to keep the country safe.

"Have faith in your cadres. Three farm laws were repealed (by the Centre) and a debate was not allowed in Parliament...why? Because they are afraid and the decision to repeal (the farm laws) was made with an eye on the forthcoming Uttar Pradesh elections," she claimed.

"I am not contesting the UP elections," she said adding that her party will work for all sections of the society without bias, but the focus will be on the poor people.

She said laws like the Unlawful Activities Prevention Act (UAPA) were being misused in the country.

"The UAPA is for the internal security and protection from external forces. This is not for common people. The UAPA is being misused like anything. The I-T department, CBI  ED are also being misused," the TMC chief claimed.

Banerjee said there was no need to be afraid and that she will fight till her last breath.

The West Bengal CM also said she was against the sellout of public sector enterprises.

"More employment should be created. We feel the public and the private sector should co-exist, but employment and the poor should not be impacted," she said.

On her meeting scheduled with NCP president Sharad Pawar later in the day, Banerjee said Maharashtra and West Bengal have good relations and that is why she is going to meet Pawar.

"Let's be united, give justice to people and save our country and democracy," she said.

Banerjee appealed to members of the civil society to travel to across the country to generate awareness towards this cause.

On the occasion, NCP leader Majeed Memon said West Bengal and Maharashtra account for 90 Lok Sabha seats and claimed the BJP's strength could be reduced substantially in the Lower House of Parliament.

The meeting was seen as an outreach to fellow opposition leaders by the TMC head.