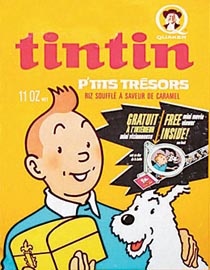 On January 10, 1929, Le Petit Vingtième (French for ‘The Little Twentieth’) the weekly youth supplement of the newspaper Le Vingtième Siècle (The Twentieth Century) published from Brussels first began publishing a comic strip featuring a young man with a tuft of hair and his companion, Snowy, a Fox Terrier. The creator of the strip was Georges Prosper Remi, who went under the pen name Hergé (1907-1983). This was “Tintin in the Land of the Soviets”.

The rest, as they say, is history.

In the first book, Tintin seems to count more on brawn than brain. The sketches too lacked the beauty that one sees in Herge’s later works. Tintin, introduced by Herge as a reporter, next visits Congo and then America. While in Congo (Tintin in Congo 1931) Tintin betrays some of the prejudices prevalent among the white folks at that time (“In the portrayal of Belgian Congo the young Herge reflects the colonial attitudes of the times”, noted the publisher in a recent issue of the book), in Tintin in America (1932), Herge made no bone about his sympathy for the native Americans.

Tintin stories set in South America (Tintin and the Picaros, The Broken Ear) reaffirm the stereotype of the countries in this region being “Banana Republics”. However, “Prisoners of the Sun” (1948) does show how roughly the indigenous folk of the region were treated by the descendents of the Europeans who had migrated to South America after the discovery of the “New World”.

India features in three of Tintin stories. In the book “Cigars of the Pharao” (1934), Tintin’s plane crashes in the jungle. He then runs into a sick elephant. Tintin cures the elephant who then transports him to safety. Besides befriending the elephant, Tintin also experiences other aspects of the Indian exotica during his adventure in the country. He runs into a friendly Maharaja, meets a mendicant who prefers a bed of nails for seating rather than a cushioned chair.

In Blue Lotus (1936), Tintin heads for China from India. Tintin last came to India en route Tibet (Tintin in Tibet, 1960). Tintin and his friend Captain Haddock land in Delhi and see the Red Fort and Qutab Minar. Haddock gets a dressing down from a labourer for bumping into him . Interestingly, the angry remarks of the labourer made in Hindi were written in the book in Devanagari script .

Bengali children’s magazine “Anandamela”, brought out by the Kolkata-headquartered media behemoth ABP Group, first translated Tintin into an Indian language in the mid-1970s. It was an instant hit. According to the memoir written by Badal Basu, publisher of the ABP Group, Satyajit Ray, the legendary filmmaker, had suggested Aveek Sarkar, proprietor of the ABP Group, to translate and publish Tintin comics in Bengali. Tintin has been hugely popular in Bengal.

Joy Bhattacharjya, former team director of Kolkata Knight Riders, was among the first to post a message on twitter to remind those following him that it was Tintin’s 93rd b’day.