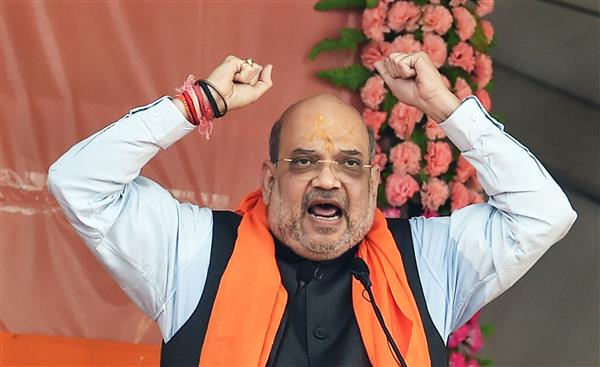 Alleging that the TMC government has introduced a “cut-money and syndicate culture” in West Bengal, Union Home Minister Amit Shah Thursday said if voted to power BJP would constitute an inquiry into the siphoning off cyclone Amphan relief funds and book the culprits.

Shah said BJP’s ‘Parivartan Yatra’ is not for changing a chief minister, an MLA or a minister but ending infiltration and transforming West Bengal into a developed state.

“This is BJP’s fight to make Bengal ‘Sonar Bangla’ (Golden Bengal). This fight is between our booth workers and the syndicate of TMC. It is not just our aim to bring BJP government after removing Mamata Banerjee’s ministry.

“This ‘Parivartan Yatra’ is for ending infiltration and also for the transformation of Bengal. You vote for the BJP.

Leave alone illegal immigrants, not even a bird from across the border will be allowed to enter the state,”Shah said after flagging off the final leg of the five phased Rath yatra in the state.

“The central government had sent relief and funds post Amphan for affected people. But, the TMC leaders siphoned off the funds and did not allow it to reach the affected people.

“If we are voted to power, the government will constitute an inquiry committee to probe corruption in disbursal of Amphan relief funds. All those who have indulged in corruption would be sent to jails,” he said.

Shah also announced that the BJP will constitute ‘Zero Casualty Task Force’ to save lives from cyclones and environmental disasters if voted to power.

Speaking on the controversy over ‘Jai Shri Ram’ slogan, Shah said, Bengal CM gets angry at the slogan due to her appeasement politics.

“You get angry over it because you want to appease a particular section of the people for vote bank politics. Jai Shri Ram slogan is a symbol against anti-appeasement policies,” he said.

Banerjee had on January 23 declined to speak at an event to celebrate Netaji Subhas Chandra Bose’s birth anniversary where “Jai Shri Ram” slogans were raised in the presence of Prime Minister Narendra Modi.

“Should the Durga Puja not take place in West Bengal?

Court permission needs to be obtained for it. Should the Saraswati Puja not be held here? She had stopped it.

“It was only after BJP’s pressure that she was seen worshipping Goddess Saraswati. Didi, Bengal knows that you had stopped Saraswati puja in schools,” Shah said.

Listing out the names of some BJP workers allegedly killed in politial violence in the state, Shah alleged that the Mamata Banerjee government has created an environment of fear and panic, but the BJP is ready to take on the “goons” of the ruling TMC.

“You think that we can get intimidated by the TMC goons?

They cannot stall BJP’s march to power. Once we are in power, every perpetrator of violence that led to the killing of BJP workers will be thrown behind bars,” he asserted while claiming that TMC goons have so far killed its more than 130 workers.

Lashing out at “dynastic politics” in the TMC, Shah alleged that Banerjee has been working only for the welfare of her nephew instead of the masses.

The union minister said the BJP is ready to take on the “goons” and the “syndicates” of the ruling TMC.

“We have to end this syndicate rule of TMC, where if you want to build a house you need to pay money. If you need anything you have to pay money to TMC leaders. The BJP will end this culture,” he said.

Shah also reached out to the West Bengal government employees and said the 7th Pay Commission will be implemented in the state if the saffron party is voted to power.

“The financial condition of Bengal is so bad that the state government employees don’t get the benefits of the 7th Pay Commission. If voted to power we would implement it in the state,” he said.

The BJP leader said Banerjee has deprived masses of the benefits of many central schemes and the people have decided to elect a BJP government in Bengal in the upcoming assembly polls. — PTI