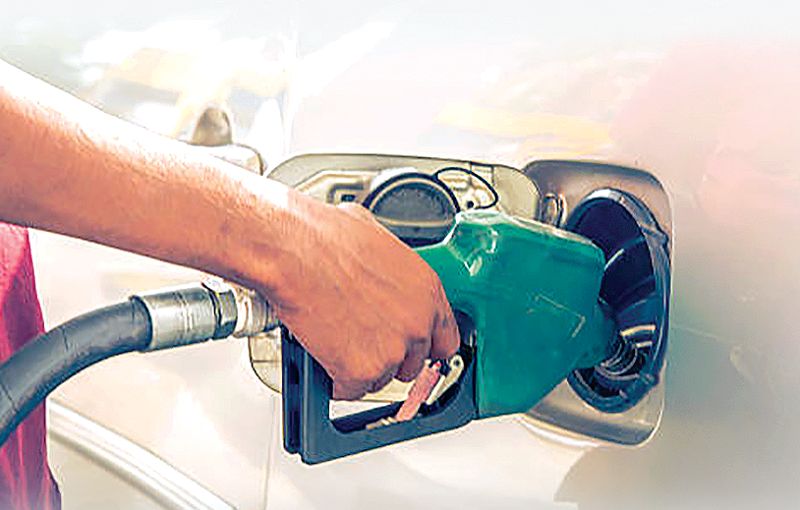 The Centre on Saturday cut excise duty on petrol by Rs 8 per litre and that on diesel by Rs 6 per litre as it announced a host of measures to tame inflationary pressures that have sent household budgets as well as business plans haywire due to their cascading effect.

The excise duty cut will translate into a price reduction of Rs 9.50 a litre on petrol and Rs 7 on diesel after taking into account its impact on other levies.

Announcing the duty cut through tweets, Finance Minister Nirmala Sitharaman also said the government would give Rs 200 per cylinder subsidy to nine crore Ujjwala Yojana beneficiaries for 12 cylinders in a year to help ease some of the burden arising from cooking gas rates rising to record levels. “This will help our mothers and sisters. It will have a revenue implication of around Rs 6,100 crore a year while the cut in excise on diesel and petrol will have revenue implication of around Rs 1 lakh crore per year for the government,” she said.

The Centre also announced an additional Rs 1.10 lakh crore fertiliser subsidy to provide further cushion to farmers due to its rising import prices as a result of the Ukraine-Russia conflict. 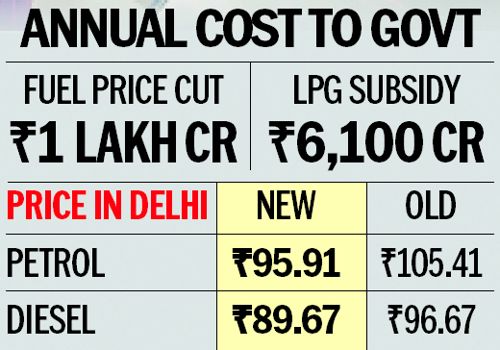 This is in addition to the budgetary allocation of Rs 1.05 lakh crore. “Despite rising fertiliser prices globally, we have protected our farmers from such price hikes,” said Sitharaman.

The RBI and global rating agencies have held the high fuel and food costs as the factors fuelling inflation, which has hurt savings and investment, besides having a more pronounced adverse effect on the poor. “It is always people first for us! Today’s decisions, especially the one relating to a significant drop in petrol and diesel prices will positively impact various sectors, provide relief to our citizens and further ensure ease of living,” Prime Minister Narendra Modi tweeted. The Congress demanded that Sitharaman should “show courage” and roll back excise on petrol and diesel to the level it was under the UPA in May 2014.

The government also notified customs duty cuts in raw materials and intermediates where the import dependence is high. “This will result in reduction of cost of final products,” said the minister. These include chemicals, plastics, intermediaries for iron and raw materials of steel. Measures were also being taken to improve the availability of cement and through better logistics to reduce the cost of cement, she said.

“I wish to exhort all state governments, especially the states where reduction (tax on petrol and diesel) wasn’t done during the last round (November 2021), to also implement a similar cut and give relief to the common man,” she observed.