Shrivastava said it is wrong when people say that there were lapses in the arrest of the 22-year-old activist. 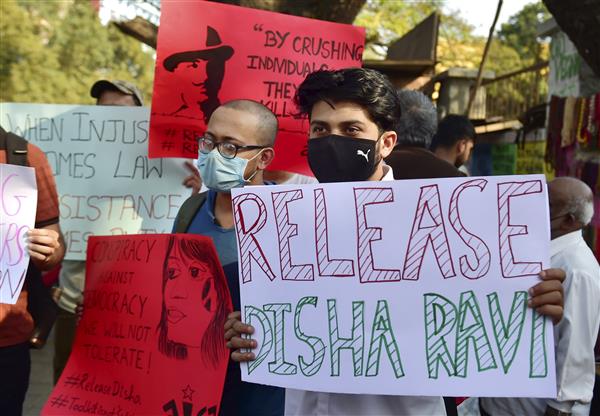 Rebutting the criticism in some quarters that there were procedural lapses in arresting 22-year-old environment activist Disha Ravi, Delhi Police Commissioner SN Shrivastava said, the police action was as per the procedure established by the law and it does not differentiate adult people based on age.

Editorial
The arrest of Disha Ravi: Rule of law not a concession given by State to citizens

Speaking to media persons on the sidelines of an event to mark Delhi Police’s 74th Raising Day, Shrivastava said, “As far as Disha’s arrest is concerned, it is done as per the procedure that law provides. Law does not differentiate between a 22-year-old and a 50-year-old. She was produced before a court, which sent her to 5-day police custody. It is false when people say that there were lapses in the arrest.”

Ravi was arrested from Bengaluru on Saturday in connection with a protest toolkit backing the farmers’ agitation. Police claimed that she had sent the toolkit to teen climate activist Greta Thunberg through the Telegram app, and also “coaxed her to act on it”.

Earlier, while addressing the gathering at the event, Shrivastava said, “Delhi Police tackled the COVID-19 lockdown in a commendable manner, earning the title of ‘Dil Ki Police’. We lost 34 police personnel during this period.”

He also asserted that the Police conducted an impartial investigation in cases relating to Northeast Delhi riots based on technological support and the evidence. “1 constable lost his life while many personnel got injured. We didn’t discriminate on the basis of religion and registered 755 cases,” he added.