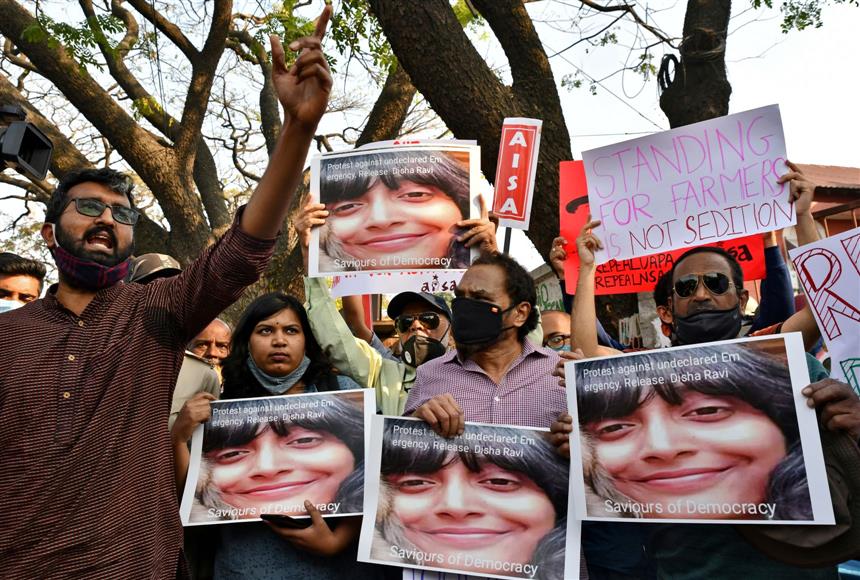 Advocating a balance between right to privacy, freedom of speech and sovereignty and integrity of India, the Delhi High Court on Friday asked the Delhi Police to abide by their affidavit that they won’t leak personal information about activist Disha Ravi, who was arrested from Bengaluru in the Toolkit case last week.

Acting on Ravi’s petition seeking to restrain the Delhi Police and the media from leaking to the media any probe material in relation to the FIR lodged against her, a Bench of Justice Pratibha M Singh said certain media coverage of the investigation indicated “sensationalism and prejudicial reporting” of the case.

“Media shall ensure that telecasts are from verified and authentic sources. Editorial teams should ensure that such broadcasts have verified content. Channel editors to ensure proper editorial control so that investigation is not hampered,” Justice Singh said while posting the matter for further hearing in March.

The high court also asked the 22-year-old climate activist—who was sent to three-day judicial custody by a Delhi court on expiry of her five-day police remand—to ensure that people connected to her didn’t indulge in unnecessary or scandalising messages and the parties didn’t go on a maligning course during the investigation.

On behalf of Ravi, senior advocate Akhil Sibal wanted the court to order certain TV channels to take down reports having reference to the “so-called WhatsApp conversations” from their online platforms and restrain them from disseminating any information of the probe which was not part of public record.

However, the court refused to order removal of any such content at this stage with regard to the probe into the FIR against Ravi for her alleged involvement in sharing a toolkit backing farmers” protest.

“There is no doubt that regulation of content has been a very contested issue across the world and India is no exception to it,” the high court noted.

The high court asked media houses to ensure that no leaked investigation material was broadcast as it could affect the probe. It also directed the Delhi Police to abide by their affidavit that they had not leaked nor did they intend to leak any probe details to the media.

Noting that journalists can’t be asked to reveal sources, it said they needed to ensure verifiable, authentic sources were used.

The police would be entitled to hold press briefings in accordance with the law and their 2010 office memorandum with regard to media coverage of cases, it said.

In their affidavit, the Delhi Police denied Ravi’s allegations and asserted that they had not leaked any input with the media. On behalf of the Delhi Police, Additional Solicitor General SV Raju said, “Her phone was seized on February 13, she could have leaked it herself from between February 3 and 13 while her phone was with her.”