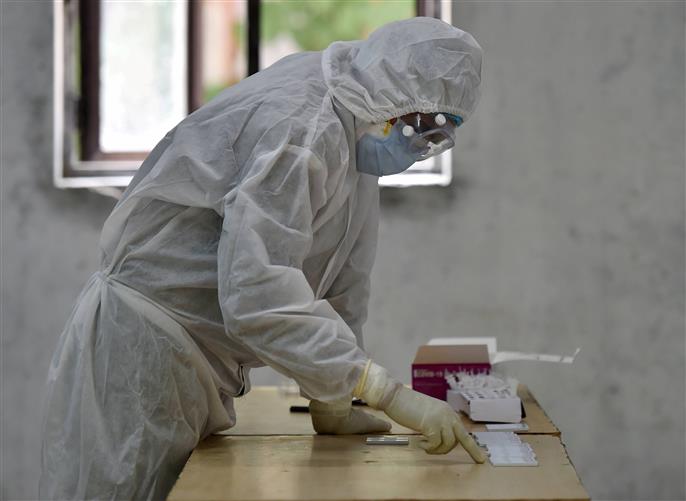 The jeweller invited several members of the jeweller association. — PTI

The death of two city jewellers from coronavirus has sent panic among their fellow jewellers and some politicians in the city.

A 63-year-old diamond jeweller who had organised the party for his relatives and friends two weeks ago succumbed on Friday. One of his guests, another city jeweller, had died earlier.

A hundred people, mostly jewellers from Telangana Jeweller Association but also some politicians, were part of the celebrations held despite a ban on public congregation in the wake of the coronavirus public health crisis.

What’s more astounding is that health authorities said that a leading politician from the ruling Telangana Rashtra Samithi and some 11 other people who attended the party have since tested positive, and are undergoing treatment at different hospitals in the state.

The incident was kept a close-guarded secret, until, that is, the two jewellers.

Sources in the Telangana Health Department said three days after the party, a jeweller who was among the guests developed COVID-19 symptoms and was admitted to a private hospital, where he tested positive. The host too developed coronavirus symptoms and died last week.

The development has since sent authorities scrambling to track down the guests and put them under surveillance.

Hyderabad has been witnessing a spurt in COVID-19 cases: the city’s infections currently stand at 22,312---about 10,487 of which are active. As of Saturday, Greater Hyderabad alone accounted for 1,572 of these cases while Telangana got 1,850 new cases.

Telangana Health Minister Etela Rajender said he was dismayed at the drastic rise in COVID-19 cases, blaming the rise on people unwilling to follow precautions. “Families are hosting birthday parties, organising engagement functions, or getting together at homes to celebrate a new birth. Amidst all this it just takes one to become a super spreader, wasting the entire efforts of the government,” he said.

Director of Public Health and Family Welfare, G. Srinivas Rao said many of those who have turned COVID-19 positive after attending the birthday bash were undergoing treatment at Gandhi Hospital, Fever Hospital, King Koti Hospital and Chest Hospital--- all four Hyderabad.

This is not first time such an event has led to an administrative nightmare---just a day before, a police constable who distributed sweets after the birth of a son also tested positive, as did the 12 recipients of the sweets.

Rao said: “These are the super-spreaders due to which the number of positive cases has gone up in Hyderabad. Despite so much publicity, some people just refuse to follow the rules. Birthday parties, family gatherings to celebrate a birth, or youths getting together to welcome a foreign returnee are proving to be hotspots of coronavirus spread. Asymptomatic persons attending huge gatherings like this are spreading the infection”.

Meanwhile, neighbouring Andhra Pradesh too has been seeing a spurt of cases, with the state reporting 998 positive cases today. The latest update takes the cumulative tally of COVID-19 cases to 18,697, which include cases detected among returnees from other states and foreign countries.

The state government said 10,043 affected persons are currently being treated in hospitals and the state recorded 14 deaths in the past 24 hours.