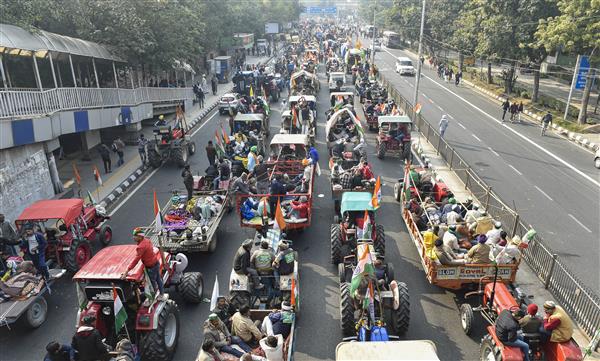 Farmers at the ITO in New Delhi on Tuesday. PTI file

Traffic continued to remain affected at ITO on Wednesday due to a protest called by retired Delhi Police personnel against the violence which broke out during the farmers' tractor parade in the city.

The protesters are demanding proper action against those involved in the violence.

According to the Delhi Traffic Police, the road going towards Connaught Place from Minto Road is closed and the road leading towards India Gate from ITO has also been closed.

Ghazipur market, NH-9 and NH-24 have been closed. Commuters going to Ghaziabad from Delhi are advised to take Shahdara and DND, it said.

The tractor parade on Tuesday that was to highlight the demands of the farmer unions to repeal three new agri laws dissolved into anarchy on the streets of the city as tens of thousands of protesters broke through barriers, fought with police, overturned vehicles and hoisted a religious flag from the ramparts of the Red Fort.

More than 300 policemen had been injured, he said. — PTI