Truck runs over 6 in Delhi, four dead : The Tribune India 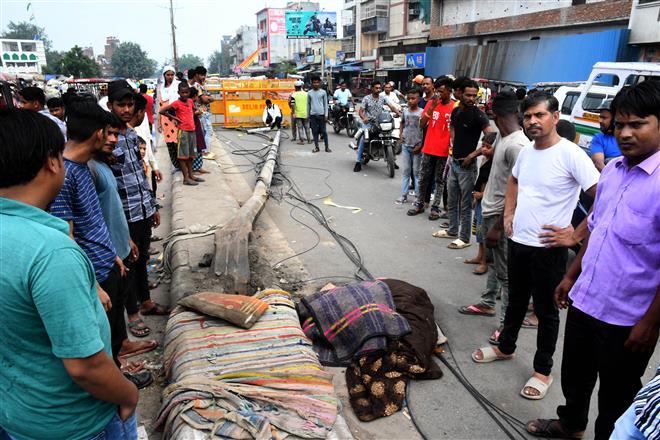 Locals gather at the site where four people were killed in New Delhi on Wednesday. Tribune Photo

Four people sleeping on a road divider were killed and two others injured after they were run over by a speeding truck in the early hours of Wednesday in northeast Delhi's Seemapuri area, the police said.

They said driver of the offending vehicle was nabbed from Shamli district in Uttar Pradesh.

A CCTV footage, which recorded the incident at 1.51 am, showed a truck crossing a DTC depot traffic signal and mowing down people sleeping on the road divider, while heading towards the DLF T-point.

According to police, two persons died on the spot and four others were rushed to GTB Hospital in injured condition.

Of the four, one was declared brought dead and another died during treatment, the DCP said.

A case has been registered under Indian Penal Code sections 279 (rash driving or riding on a public way), 304A (causing death by negligence) and 337 (causing hurt by act endangering life or personal safety of others) against the accused driver, the police said.