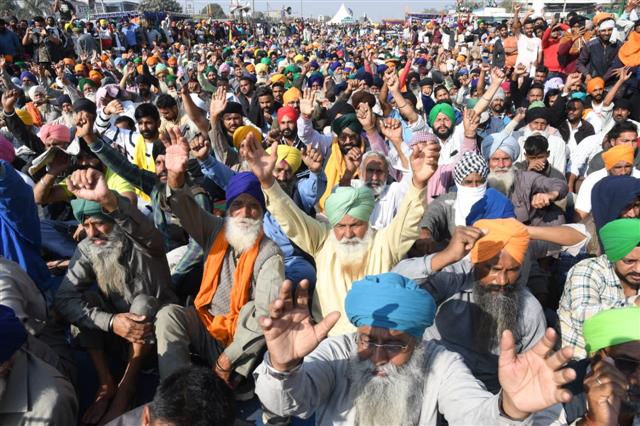 Camping at protest venues near Delhi borders for around 40 days, braving severe cold and sporadic rain, farmers have asserted that their stir against the farm laws will intensify in the coming days, even as they deferred Wednesday's proposed tractor march over a bad weather forecast.

The deadlock continues as the seventh round of talks with the Centre remained inconclusive, with the farmer groups sticking to their demand for the repeal of the three new laws, and the government listing out various benefits of the new Acts.

The national capital, meanwhile, reels under a spell of harsh winter. The city woke up on Wednesday to the rumble of thunder and the sound of hailstones hitting rooftops and windows as it received rain for the fourth consecutive day.

The rain, caused by a strong western disturbance, comes on the back of a "severe" cold wave that gripped Delhi in the run-up to New Year. On Friday, the mercury had plummeted to 1.1 degrees Celsius, the lowest in 15 years for January.

On Tuesday, the protesting farmers said they were deferring their proposed tractor march from January 6 to January 7 due to a bad weather forecast.

Thousands of farmers from Punjab, Haryana and some other parts of the country have been camping at several Delhi border points since November 28, demanding repeal of the farm laws, a legal guarantee on minimum support price for their crops and other two issues.

Last week, the government agreed to exclude farmers from penal provisions of the Air Quality Management ordinance and not to pursue the draft Electricity Bill.

Also read: There is absolutely no improvement in situation: CJI on talks between govt and farmers

Since the farmers arrived at the national capital's borders, the Delhi Traffic Police has been posting alerts on its official Twitter handle to inform commuters about road closures across the city.

In a series of tweets on Wednesday, it said Singhu, Auchandi, Piau Maniyari, Saboli and Mangesh borders were closed for traffic movement.

"The Chilla and Ghazipur borders are closed for traffic coming from Noida & Ghaziabad to Delhi because of farmer protests. Please take alternative route for coming to Delhi via Anand Vihar, DND, Bhopra & Loni Borders," the traffic police said.

It said Tikri and Dhansa borders are also closed for traffic movement.

According to the traffic police, people travelling to Haryana can take the routes via Jharoda (only single carriageway), Daurala, Kapashera, Badusarai, Rajokri NH-8, Bijwasan/Bajghera, Palam Vihar and Dundahera borders. — PTI