UP Phase-3 poll: BJP slams Akhilesh, accuses SP of having ‘links with terrorists involved in 2008 Ahmedabad blasts’ : The Tribune India

627 candidates in fray with over 2.15 crore voters; 59 constituencies go to poll on Sunday 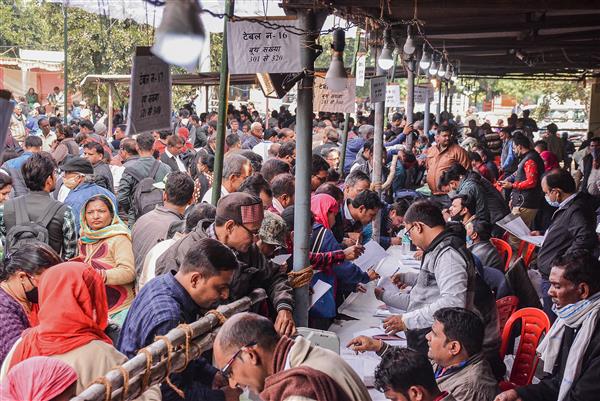 Polling officials at a distribution centre on the eve of third phase of Uttar Pradesh assembly elections, in Kanpur, on Saturday, February 19, 2022. PTI

A day before voting in the Phase-3 elections in Uttar Pradesh, the ruling BJP on Saturday dubbed its main rival Samajwadi Party as “anti-social”, “friends of minority appeasement” and accused it of having “links with terrorists involved in the 2008 Ahmedabad blasts”.

A special court on Friday sentenced to death 38 members of terror group Indian Mujahideen (IM) in the Ahmedabad serial blasts.

Addressing a press conference, union minister Anurag Thakur produced a photograph in which the father of one of the convicts was seen with SP chief Akhilesh Yadav to allege SP’ “connections” with the Ahmedabad blasts perpetrators

“The BJP has always had zero tolerance for terrorism, whereas the SP stands with those involved in terror activities. Ahmedabad serial blasts had direct links to SP leaders in Uttar Pradesh,” he said, asking Akhilesh to reply on the issue.

“Ram on lips and siding with terrorists. It is not Samajwadi Party but Samajvirodhi Party (anti-social party). It is for minority appeasement,” Thakur claimed, a day ahead of the third phase,also considered the “Yadav belt” andwhere the BJP and the SP are locked in a direct contest.

The voting for 59 assembly constituencies spread across 16 districts of Uttar Pradesh will be held on Sunday.

The constituencies include Karhal from where Akhilesh Yadav is contesting against BJP’s S P Singh Baghel.

The day will also seal the fate of his uncle Shivpal Singh Yadav, who is contesting from his traditional Jaswantnagar seat.

Prominent faces in the fray in the phase include Louise Khurshid, who is contesting on the Congress’ ticket from Farrukhabad Sadar. Louise Khurshid is the wife of senior Congress leader Salman Khurshid.

In the 2017 Assembly elections, the BJP won 49 of the 59 seats while the SP had to settle for nine. The Congress managed to get just one seat while the BSP drew a blank.