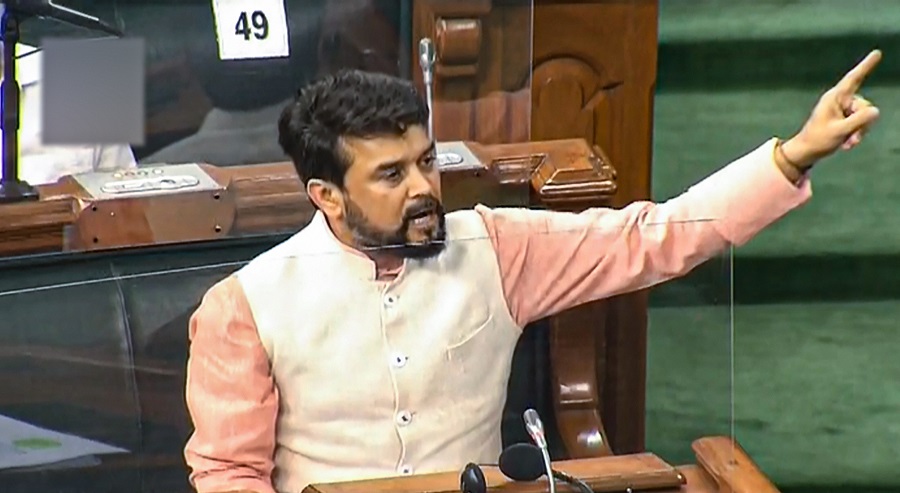 Minister of State for Finance Anurag Thakur speaks in Lok Sabha during the ongoing Monsoon Session of Parliament, in New Delhi on Friday. PTI

The Opposition and the ruling BJP-led government clashed over setting up of the PM Cares Fund, leading to Minister of State for Finance Anurag Thakur expressing ‘regret’ over his remarks on Jawaharlal Nehru to restore the House proceedings.

The House was adjourned four-times between 4 pm and 6 pm after Thakur took a jibe at the former Prime Minister.

The argument started when the ‘Taxation and Other Laws (Relaxation and Amendment of Certain Provisions) Bill, 2020’ was tabled.

Thakur, while answering points raised  by the Opposition on the need to create a new PM Cares Fund, said the earlier Prime Minister's National Relief Fund was created by Nehru ji (Jawaharlal Nehru) like a royal order.

From 1948 till today, it has not been registered. How did it get (foreign contribution) FCRA clearance? The trust is not registered, he said.

The PM CARES is a registered public charitable trust.

This is for 130 crore people, said Thakur, adding “You created a trust for the Gandhi family. Nehru, Sonia Gandhi were members of the PM National Relief Fund. This should be investigated.”

This led to a pandemonium as the Congress leader of the House in Lok Sabha Adhir Ranjan Chaudhary retorted saying have we said that Modi is stealing from funds, how did he (Anurag) use the words for Nehru.

“He  is lowering the respect of the Chair of Speaker,” Chaudhary told the Speaker.

At 6 pm, the House resumed normal business after Thakur said: “I did not want to hurt anyone. If anyone is hurt I regret my words.”

Manish Tewari while protesting the tabling of the Bill cited a clause saying it allows the Centre to avoid paying the GST dues to states.

Finance Minister Nirmala Sitharaman assured the House “we are not running away from responsibility”.

“We have not said that we will not pay the states,” she said.

Meanwhile, Kalyan Banerjee of the Trinamool Congress (TMC),  accused Speaker Om Birla of “protecting” BJP members, saying, “You tell us to sit down and you don’t say anything to BJP members who shout. You are protecting the BJP and not allowing us to speak.”