UP's Kanpur gets its own 'Spiderman'

A seven-year-old boy, Yasharth Singh Gaur, is climbing walls like Spiderman, without any support 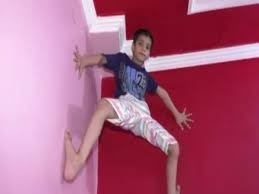 Kanpur that has lately been in the news for all the wrong reasons, including the Bikru massacre of eight policemen, now has something to smile about.

The industrial city has found its own 'Spiderman'.

A seven-year-old boy, Yasharth Singh Gaur, is climbing walls like Spiderman, without any support.

The boy, a student of class three, said that he got the inspiration to climb walls after seeing the 'Spiderman' series.

"I tried doing that at home. Initially, I used to fall down, but later I mastered that technique. I told my brother about it, and he told everyone else," Yasharth said.

Yasharth, who wants to be an IPS officer when he grows up, said that in the beginning, the elders at home used to discourage him from climbing walls as they were afraid that he would fall down. But later when they saw him doing it daily, they stopped doing so.

"I am afraid to fall. I will jump if I slip and try again," the boy said.

A local doctor, R. K. Massey, meanwhile, said that there was no miracle in what Yasharth was doing.

"It is a case of practice making him perfect in doing the feat. He has practiced hard and is able to carry his weight. As he grows older and his weight increases, he may not be able to do so," he said. IANS

"I tried doing that at home.Initially,I used to fall down,later I mastered the technique.I told my brother about it &he told everyone else,"Yasharth said. pic.twitter.com/96hTnqa7s7