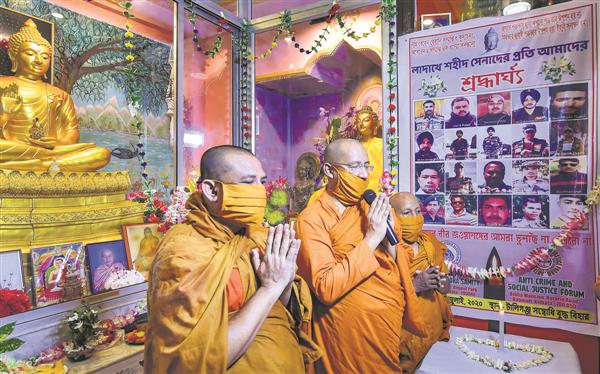 The US has once again publicly conveyed its support to India amid the tensions with China along the Line of Actual Control (LAC). The US military “will continue to stand strong” in a conflict between China and its allies like India, White House Chief of Staff Mark Meadows has said.

US thanks India for hosting Dalai Lama

Meadows’ statement of solidarity follows US Secretary of State Mike Pompeo last week stating that China’s “deadly” confrontation with India was one of the reasons for the Pentagon to reduce its defence commitments in Europe and look at countering emerging threats posed by China in the Asia-Pacific.

After India, US may ban TikTok

Taking a cue from India, the US is looking at banning Chinese app TikTok, said US Secretary of State Mike Pompeo. Pompeo said TikTok would be banned along with other Chinese apps. He had lauded India’s ban on 59 Chinese apps. TNS

Pompeo has also touched base with External Affairs Minister S Jaishankar in private as the US seeks to position itself as a useful ally for New Delhi in its border standoff with China.

India has turned down mediation offers from US President Donald Trump and instead ordered military equipment worth Rs 40,000 crore from Russia. As opposed to Russia’s approach of trying to keep India-China cooperation alive in regional fora, the US official said: “The message is clear. We’re not going to stand by and let China or anyone else take the reins in terms of being the most powerful, dominant force, whether it’s in that region or over here.”

“Our military might stands strong and will continue to stand strong, whether it’s in relationship to a conflict between India and China or anywhere else,” said Meadows.

A more concrete gesture of support from Washington came in the form of India-US foreign office consultations on Tuesday. Foreign Secretary Harsh Vardhan Shringla and Under Secretary of State for Political Affairs David Hale reviewed the entire gamut of engagements. They reaffirmed their commitment to working towards ensuring a free, open, inclusive, peaceful and prosperous Indo-Pacific, besides discussing the sticking point of US visa curbs. Pompeo also made a phone call to Maldives Foreign Minister Abdulla Shahid on Sunday, which helps India.

The phone call assuring Maldives of American help in combating Covid and taking up development projects that will keep China away from the island nation at a time when India is distracted with its border troubles and a sputtering economy.