More than 19.99 lakh candidates were to appear for the Uttar Pradesh Teacher Eligibility Test 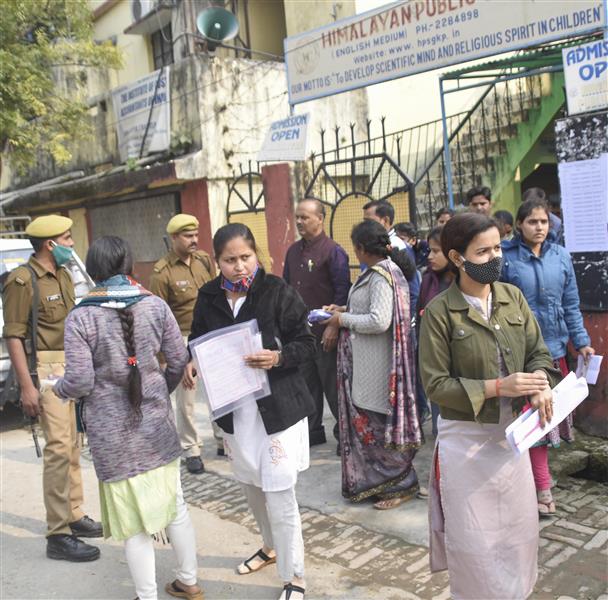 Candidates wait outside an examination centre during the Uttar Pradesh Teacher Eligibility Test 2021, in Gorakhpur on November 28, 2021. ? PTI

The UPTET scheduled to be held on Sunday was cancelled after a question paper for the exam was leaked, an officer here announced shortly before the exam was to begin.

In a statement issued here, the UP government said that more than 26 persons have been arrested in this connection.

“So far as many as 26 persons have been arrested from different districts of the state. Of this, 16 arrests were made in Prayagraj,” it said.

Those arrested in Prayagraj include Satya Prakash Singh, an assistant teacher at a primary school in the city’s Shankargarh area.

When searched, he was found to have the solved question paper in his WhatsApp.

Rajendra Patel — the alleged mastermind of the whole operation — and Chaturbhuj Singh, one of the key players, were also among those arrested from Prayagraj, according to the statement.

Besides them, police arrested other members of the gang, including one Sunny Singh, who was instrumental in sourcing solvers from Bihar, the statement said.

Four persons were arrested from Lucknow district, and one each from Kaushambi, Ayodhya, and Ambedkarnagar district.

Three persons were arrested from Shamli district. These three had procured 10 copies of the question paper for Rs 5 lakh, and had taken Rs 50,000 from 50-60 candidates each to give them access to the papers for reading and memorising.

Search is on for the rest of the members of the gang, the government said.

UP Chief Minister Yogi Adityanath said the culprits will be booked under the National Security Act and Gangster Act.

He also ordered reconvening of the exam within a month.

“A question paper was leaked. I issued an order to cancel the examination and arrest the entire racket. Instructions were also given to conduct the exam within a month, and that no candidate should be charged additional fee,” he said addressing a function in Deoria district on Sunday.

He said orders were given to transport the students back to their home towns in UPSRTC buses free of cost on the basis of their admit cards.

“Those who have committed this act should listen that cases will be registered against them under the Gangster Act and the National Security Act,” he said.

Later in a tweet in Hindi, the CM said properties will be seized by the government of those involved in the leak.

Close to 20 lakh candidates were to appear for the Uttar Pradesh Teachers Eligibility Test (UPTET) on Sunday.

Additional Director General (ADG) Law and Order Prashant Kumar earlier in the day said the matter will be probed by the UP STF, and people or organisations involved in the leak will not be spared.

The situation at centres was under control and announcements were made there to urge the candidates to go back to their homes, added the officer.

Adityanath in a tweet said, “The state government is standing with the candidates of UPTET, and a re-exam will be held in a transparent manner within one month.”

“Those who have played with the future of our young brothers and sisters will not be spared. People who have caused inconvenience to you will definitely be punished. Your government is committed to conduct the exams in a fair and transparent manner,” he said in another tweet.

UP’s Basic Education minister Satish Dwivedi said the exam — in both shifts—was cancelled immediately after the leak came to surface and promised strict action against the culprits.

Leader from the opposition parties criticised the BJP government for the paper leak and accused it of abetting corruption in the state.

Samajwadi Party chief Akhilesh Yadav said such incidents have become a norm under its rule.

“Corruption in education in UP is at an all-time high. The unemployed will usher in a revolution, and there will be a change in 2022,” he said.

Congress general secretary Priyanka Gandhi Vadra too alleged that corruption in education and recruitment has become common under the BJP.

BSP chief Mayawati in a tweet in Hindi criticised the BJP and also the previous SP government for such incidents and asked for a high-level probe in the matter from the current government.

“The UP Government must take this incident very seriously, get a high-level probe done, ensure that the guilty are punished, and make concrete arrangement to reconduct this examination. This is the demand of the BSP,” she said.

The Uttar Pradesh Basic Education Board (UPBEB) will conduct the UPTET exam again after one month. The government will bear the entire expenditure on the re-examination, said additional chief secretary Basic Education department, Deepak Kumar.

The UPBEB has further notified that candidates will not have to pay any fees again for the exam. The exact date of the UPTET exam will be notified in due course of time, the UP government said.

The UPTET 2021 exam was scheduled to be conducted at several exam centres across 75 districts of UP.