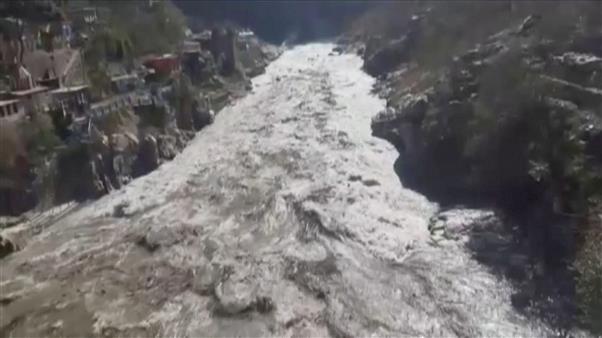 A general view during a flood in Uttarakhand state, February 7, 2021 in this still grab obtained from a video. Via Reuters

The Uttarakhand tragedy on Sunday has generated a debate about what lead to the disaster, with some environmentalists questioning the official version of a “glacier burst”.

“Are you sure it was a glacier burst or an avalanche,” questions Himanshu Thakkar of the South Asia Network on Dams, Rivers and People.

Environmentalists have also questioned the central and state governments for clearing massive projects in eco-sensitive areas such as the Himalayas saying that the flood tragedy at Kedarnath in 2013 seems to have “taught no lessons”.

Uma Bharati, a leader of the Bharatiya Janata Party and a former member of Prime Minister Narendra Modi’s cabinet, claims she’d warned the central government about such a possibility when she was still a minister.

“When I was the minister, my ministry in its affidavit about dams in Uttarakhand in the Himalayas had said that it is a very sensitive region and power projects should not be built on the Ganga and its main tributaries,” she said.

Bharati says any shortfall in electricity should be covered by the national grid. Thakar however says that the central government must now consider wind and solar energy for mountainous areas.

Uttarakhand currently has 98 big, medium, and small dams, and has been seeing a rapid increase in infrastructure development projects such as roads, highways, and hotels. The projects, environmentalists say, are shaking up the “younger” mountains of Himalayas, and that using dynamites on these younger mountains and deliberate man-made fires in eco-sensitive areas could further exacerbate the situation.

“The Rishi Ganga project was neither ecologically nor socially acceptable and locals had raised voice against the project. Now there should be a disaster potential assessment of the project, Thakkar said.

There has also been local opposition for another project—the NTPC-owned Vishnughad Tapovan power plant.