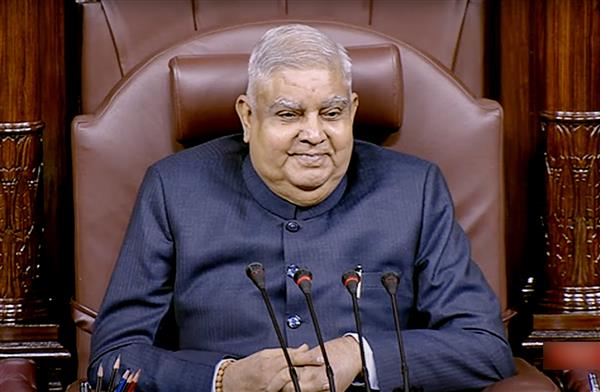 Vice-President Jagdeep Dhankhar, in his maiden speech as the Rajya Sabha Chairman on Wednesday, raised the issue of the Supreme Court scrapping the National Judicial Appointments Commission (NJAC), terming it as an instance of “severe compromise of parliamentary sovereignty”, and said the government’s three organs should respect the “Lakshman rekha”.

In his address from the chair after Prime Minister Narendra Modi and other members welcomed him, Dhankhar said that any incursion by the three organs of the government into each other’s domains “had the potential to upset the governance apple cart”.

Democracy blossoms and flourishes when its three facets—legislature, judiciary and executive—scrupulously adhere to their respective domains. — Jagdeep Dhankhar, Vice President

The remarks came in the backdrop of the recent run-ins between the government and the judiciary over the appointment of judges. “Democracy blossoms and flourishes when its three facets—legislature, judiciary and executive—scrupulously adhere to their respective domains. The doctrine of separation of powers must be respected,” he said.

Referring to the 99th Constitutional amendment Bill that entailed the formation of the NJAC, he said the “historic” parliamentary mandate on it was “undone by the Supreme Court on October 16, 2015, by a majority of 4:1, finding the same as not being in consonance with the judicially evolved doctrine of ‘Basic Structure’ of the Constitution”.

On August 13, 2014, he said, the Lok Sabha unanimously voted in the NJAC’s favour with there being no abstention. “This House too, passed it unanimously on August 14, 2014, with one abstention. Rarely in parliamentary democracy, there has been such massive support to a Constitutional legislation,” he said.