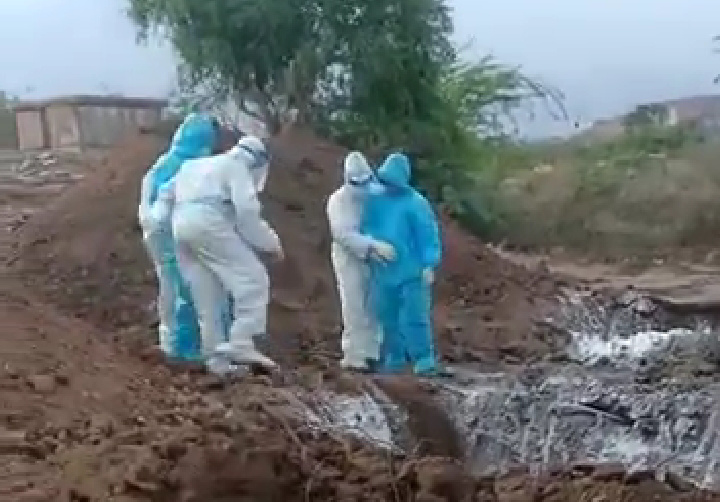 A video purportedly showing health workers burying inappropriately some bodies of COVID-19 victims in a large pit allegedly in Ballari district in Karnataka has surfaced, triggering an outrage on social media.

A top official in the district said they were inquiring into it. State Health Minister B Sriramulu is a Ballari native.

In the video, the workers wearing personal protection equipment are seen bringing bodies in black sheets from a vehicle parked nearby and dropping one after another into the large pit, dug up with the help of an earthmover.

A man who posted the video first on YouTube claimed it happened in Ballari.

It went viral on social media drawing widespread condemnation over the manner in which the dead were handled and people demanded stringent action.

“In all, eight bodies were dumped in this fashion in a single pit,” an eye-witness claimed.

Ballari Deputy Commissioner of SS Nakul said he too has noticed the viral video in the social media.

“We have ordered an inquiry,” he told reporters in Ballari on Tuesday.

Nakul said five more people succumbed to the coronavirus on Tuesday, taking the total fatalities in the district to 29 so far.

In a similar incident, the body of a 44-year old COVID-19 victim was thrown into a pit in Puducherry earlier this month, triggering public outrage and a few health workers were suspended. PTI

It's disturbing to see bodies of COVID patients who have died being dumped inhumanly into a pit in Ballari.

Is this civility? This is a reflection of how the govt has handled this Corona crisis.

I urge the govt to take immediate action and ensure that this doesn't happen again. pic.twitter.com/lsbv5ZUNCR