58.44 per cent voting recorded in fourth phase of UP polls : The Tribune India

58.44 per cent voting recorded in fourth phase of UP polls 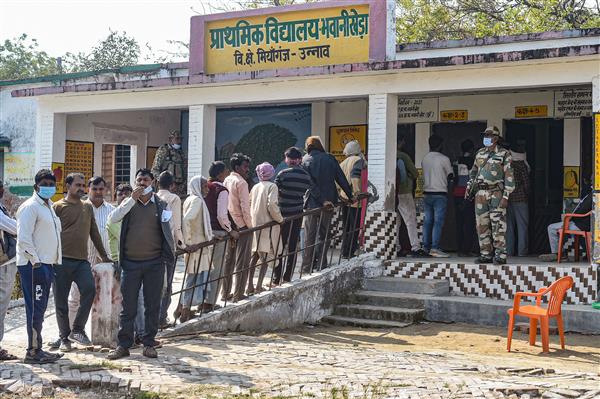 People queue up at Unnao in UP to vote. PTI

An average of 58.44 per cent voting was recorded on Wednesday in phase four of polling in 59 Assembly constituencies spread over nine districts of Uttar Pradesh, the Election Commission said.

The polling started at 7 am and will continue till 6 pm.

The Phase 4 elections on 59 seats, including Capital city Lucknow, on Wednesday witnessed some interesting political developments indicative of future possibilities.

Confident of a win, BSP supremo Mayawati claimed Samajwadi Party "dreams will be shattered" when results are announced next month.

While this was expected, the mutual praise displayed by Mayawati and top BJP leader Amit Shah for each other led to a variety of speculations amid a tough challenge posed by the Samajwadi Party in the ongoing elections.

Responding to a rather positive assessment of her campaign by Shah, Mayawati said "it is his 'badappan' (magnanimity) that he has acknowledged the truth".

Interestingly, while thanking Shah for acknowledging her party's relevance in UP, she also agreed with BJP's allegations against the Akhilesh Yadav-led party.

Claiming that her party was getting votes from all sections of society, Mayawati said “He (Amit Shah) is right in his assessment. But I also want to tell him that in the first three phases the BSP not just received Dalit and Muslim votes but also upper caste and backward caste votes.

"The Muslim samaj is already angry with SP. UP residents have rejected SP even before polling as SP means 'gunda raj'and 'mafia raj'".

“We have already seen riots during the SP regime. The face of SP leaders tell that they are not coming in power", Mayawati said.

When read in the context of UP and some recent developments in Punjab, Mayawati's words assume significance.

In Punjab, the BSP had fought with Shiromani Akali Dal (SAD) and there are enough speculations already about possibility of a post-poll alliance between former allies. So far as UP is concerned, observers say she can extend a helping hand to the BJP, if need be.

Meanwhile, Defence Minister Rajnath Singh, who cast his vote in Lucknow, said the BJP will win over 300 seats.

"BJP will match scale of 2017 verdict", he said. Similar claims were made by other BJP leaders, including chief JP Nadda, while addressing rallies and media conferences.

As UP polled for Phase-4 Prime Minister Narendra Modi also took a jibe at Akhilesh saying that “mausami” (seasonal) political leaders "disappeared during the peak of the Covid-19 pandemic and reappeared once the infection was brought under control through vaccinations".

"They instigated people against the vaccine but got themselves vaccinated. People of UP are well aware of seasonal leaders,” he said.

Akhilesh, in turn, claimed that Adityanath has "booked a plane ticket from Lucknow to Gorakhpur" for March 11.

Responding to BJP leaders that he is flying to London after the results, Akhilesh said "the polling results will be out on March 10 but our Baba Mukhya Mantri has booked a plane ticket from Lucknow to Gorakhpur for March 11. Imagine how scared BJP leaders are".

On Tuesday he too created a flutter with a meeting with BJP MP Rita Bahuguna Joshi's son Mayank Joshi, who was denied a ticket by the saffron party.