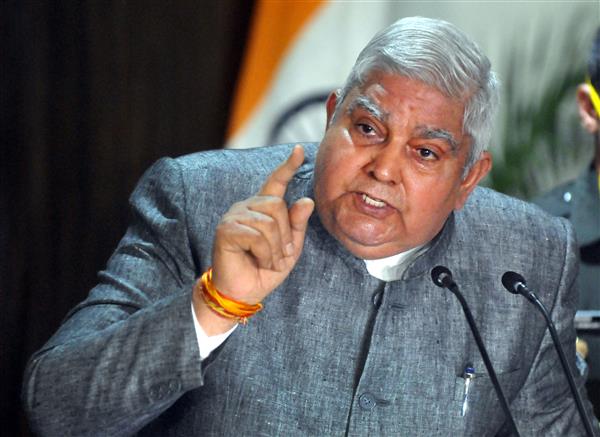 West Bengal Governor Jagdeep Dhankhar has written to the state chief secretary HK Dwivedi, who had failed to appear before him twice despite summons, upbraiding him and giving him a seven-day deadline for his reply on why Leader of Opposition Suvendu Adhikari was stopped going to Jhargram to attend a programme despite a Calcutta High Court order that there should be no restrictions on his movement.

Dhankhar in his strongly-worded two-page letter dated January 18 said that this was the "last opportunity" given to him to provide his response in the matter and in case he fails to appear before him this time too "serious consequences will follow in due course".

The chief secretary would also be required to render full explanation of his acts of omission in the case all through, the governor said.

"Sequence of events leave no manner of doubt that the defiance and dereliction of duty is extreme at the level of the CS. As a matter of fact this stance has become habitual, unmindful of all lawful objections towards this office or rule of law," the letter said.

The governor wrote, ".. The chief secretary is provided a last opportunity to provide his comprehensive response regarding the above mentioned matter at the earlier, in any case not later than seven days from the receipt of this communication ... Failing which it will be presumed that he is working in complete disregard of the lawful directives of this office and that his actions are in deliberations and international violation of the All India Service (Conduct) Rules, 1968, as a result of which serious consequences will follow in due course,"  he added.

Dhankhar had on January 8 summoned chief secretary H K Dwivedi and state DGP Manoj Malaviya for an update on the alleged incident on the previous day when Adhikari was stopped from attending a programme in Netai in Jhargram district.

Dhankhar, whose move was prompted by a complaint by Adhikari to Raj Bhavan, had also sought a written report from the two officers.

They had skipped meeting Dhankhar first on January 10 stating that they were "in isolation" and also on January 12 and neither the additional chief secretary, home, nor any police officer next to the DGP had appeared before Dhankhar to provide the update.

Adhikari had claimed that he was stopped by the police from going to Netai in Jhargram despite the Calcutta High Court order that there should be no restrictions on his movement.

The BJP leader had gone to Bhimpur where he was supposed to pay his respects to the nine persons who were killed on January 7, 2011, in firing from an alleged CPI-M activist's house during the erstwhile Left Front regime.