Speculations of him getting important portfolio, including Deputy CM, in Yogi Adityanath govt 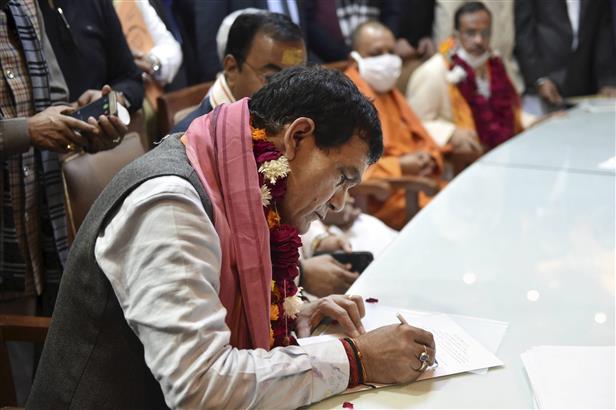 His entry on the Uttar Pradesh political scene has created massive turbulence in the state, setting it abuzz with possibilities. Speculations are that top IAS officer (now retired) AK Sharma has been earmarked for an important portfolio, including deputy chief minister, in the Yogi Adityanath government.

Adityanath has remained non-committal on the possibility as also on speculations of reshuffle of his Cabinet.

But given the proximity that Sharma enjoys with Prime Minister Narendra Modi, sources say he is unlikely to remain a mere legislator in the state.

Besides, PM Modi cares for past relationships and talent, they say citing the example of Haryana Chief Minister Manohar Lal Khattar and top bureaucrats like RK Singh, Hardeep Puri and S Jaishankar, all ministers in his council.

Today he also filed his nomination papers, according to reports.

Ever since he joined the BJP, the political corridors have been buzzing with various possibilities for Sharma, a Gujarat-cadre officer hailing from Uttar Pradesh.

He is one of trusted bureaucrats of PM Modi ever since his days as the Gujarat chief minister.

Recently he took voluntary retirement as the Secretary of the Union Ministry of Micro, Small and Medium Enterprises.

Currently there are two Deputy CMs in UP, Keshav Prasad Maurya being the second one. The polling for 12 legislative council seats in UP will be held on January 28.