'Why rule me out,' asks Digvijay Singh as Ashok Gehlot meets Sonia Gandhi : The Tribune India

'Why rule me out,' asks Digvijay Singh as Ashok Gehlot meets Sonia Gandhi 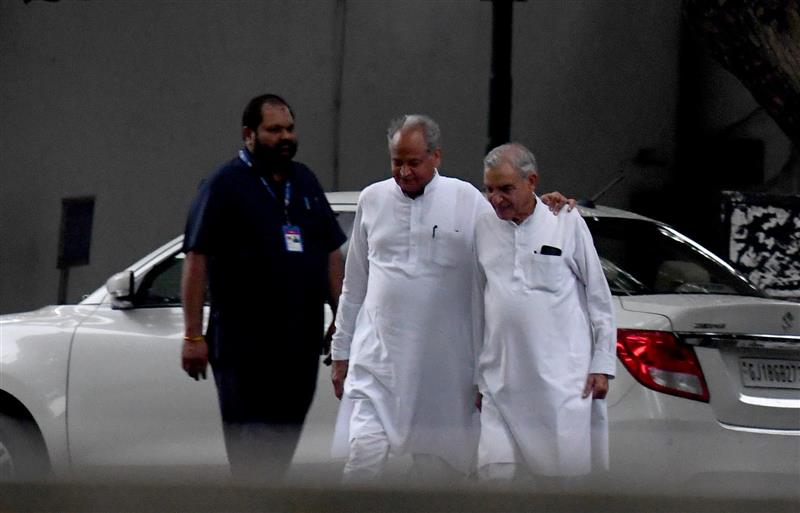 The stage appears set for an election to the post of Congress chief with Rajasthan CM Ashok Gehlot today saying “he would do whatever the party asked him to do” even as senior leader Digvijay Singh hinted at joining the race.

As Gehlot (71) arrived in Delhi and met Congress chief Sonia Gandhi for over an hour at her residence, former minister Shashi Tharoor visited the AICC headquarters to check the voters’ list in another signal that he was finalising his nomination papers for the election.

While Gehlot versus Tharoor looks certain, former Madhya Pradesh Chief Minister Digvijay Singh today queered the pitch by asking “why rule him out of the race”, signalling a possible three-cornered contest.

Gehlot, meanwhile, dug in his heels on the issue of staying the CM despite the party’s Udaipur ‘Nav Sankalp Declaration’ pledging ‘one person, one post’. He argued, “I have been given the responsibility of Rajasthan CM-ship and I am discharging it. ‘One man, one post’ rule is not applicable when someone contests an internal election. I can hold two posts, or even three. The rule applies in case of nominated positions.”

Gehlot’s insistence to remain the CM has caused consternation in the party with veterans privately saying that “if he won, he would obviously have to quit as the CM”.

With Gehlot and his bete noire in state politics Sachin Pilot both expected to be in Kochi for the ‘Bharat Jodo Yatra’ on Thursday, the onus of convincing the CM to let go of his post would be on Rahul Gandhi. The Congress top brass wants Pilot to take over as the Rajasthan CM, a prospect Gehlot is not open to.

Asked when he would file his papers for the Congress president’s poll, Gehlot said, “I will talk to other leaders and decide.” The CM is, however, expected to file his nomination after September 26. On September 23, he will pay obeisance at Shirdi. At his meeting with Sonia, Gehlot again batted for Rahul as the Congress chief saying he would once again try to convince the latter to run for the top post.

Hectic lobbying has begun for the position of Rajasthan CM. Even though Gehlot has said he would continue to hold the CM’s post, the names of Sachin Pilot, CP Joshi and Shanti Dhariwal are doing the rounds as potential replacements of Gehlot.

Sonia Gandhi is learnt to have told Ashok Gehlot she would be neutral in the election. She had given the same assurance to Tharoor.