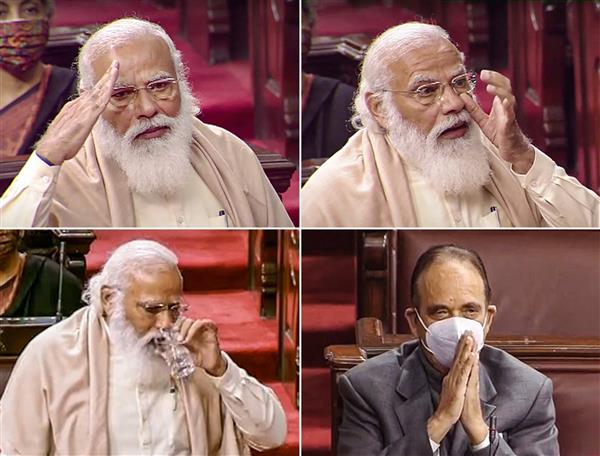 Prime Minister Narendra Modi gets emotional during his farewell speech for Congress leader Ghulam Nabi Azad in the Rajya Sabha during ongoing Budget Session of Parliament on February 9. PTI

Ever since Prime Minister Narendra Modi's emotional speech praising Congress MP Ghulam Nabi Azad in the Rajya Sabha, speculations are doing the rounds over the future of the senior leader from Jammu and Kashmir and also the two PDP leaders who retired with him.

Some visualised Azad as a potential NDA candidate for the post of Vice-President or the Rajya Sabha Chairperson.

Others, citing the Congress' "G-23", saw in Azad a possible saffron face in Jammu and Kashmir where the government plans to hold elections sometime in the future.

While the BJP's prospects are well looked after in Jammu region, it lacks sufficient talent in the Valley, leaders who are "tall, credible, compassionate and can provide healing touch to the region", say sources.

If read with the PM's reply to the debate on President's Address in the Rajya Sabha, some dots can be connected.

A day before his speech, Modi drew attention to Azad’s easy manner and his comments on Jammu and Kashmir and the recent DDC polls.

“Ghulam Nabi ji always speaks decently and never uses foul language. We should learn this from him, I respect him for it. He praised elections held in Jammu and Kashmir... I believe your party will take it in the right spirit, and not make the mistake of doing the opposite by listening to suggestions of 'G-23',” said the PM, referring to the term "Group of 23" used for Congress leaders who wrote to party chief Sonia Gandhi last year demanding changes in the organisation.

The PM's comments were also seen as an open invitation by the BJP to the group of dissenting Congress leaders.

Other BJP leaders too are all praise for the "soft-spoken, compassionate and gentle" Azad "who wants the situation to improve in the Valley".

At 71 years, Azad has a few years before he crosses the BJP's unofficial age of retirement, which is 75 years.

Moreover, for good talent, some concessions can be always made, say observers who also point to "good words" for the Narendra Modi government, including praise for Ujjwala Yojana, by PDP members who retired along with Azad.

Nazir Ahmed Laway (PDP) said he would hope that a Bill would be brought in Parliament soon to make J&K a state once again.

“The Prime Minister and Home Minister had promised this in the House that Jammu and Kashmir will become a state again. I am confident that God willing, a Bill to this effect will be brought in the House one of these days,” Laway said.

The PDP MP said he had opposed the move vociferously in the House. Now, when he would return to Kashmir, he said he would tell the people how much the rest of India cared for Kashmir and empathised with its people. “Parliament is our country’s fragrance and I am taking the fragrance with me to J&K,” he said.

Fayaz said he was happy to see that people came out to vote in the District Development Council (DDC) poll held in J&K recently. The “Ujjwala” scheme, under, which LPG cylinder were being introduced to households not having the facility, was also turning out to be a big step to help the poor women of J&K, he said.